Walmart to use Symbotic warehouse automation

After a trial in a Florida DC, Walmart will be deploying Symbotic warehouse automation systems at 25 of its 42 regional distribution centres

After a trial in a Florida DC, Walmart will be deploying Symbotic warehouse automation systems at 25 distribution centres. 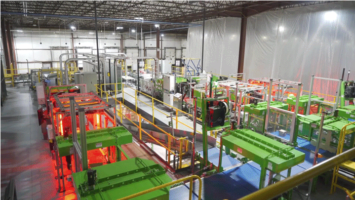 Wilmington, Massachusetts-based Symbotic first implemented its system in Walmart’s Brooksville, Florida distribution centre in 2017. Since that time, the companies have worked together to optimize the system. Symbotic will now begin the process of outfitting 25 additional regional distribution centers with the high-tech system.

“There is no greater validation of our efforts to use technology to reimagine the warehouse and supply chain than our work with Walmart,” said Rick Cohen, chief executive officer of Symbotic.

“Working with customers like Walmart has enabled us to develop this total solution and with this trust we are now positioned to develop Symbotic-powered warehouses around the country for years to come.”

Symbotic makes an ASRS that both depalletizes and puts away cases of product and then builds store-ready outbound pallets. By using dense modular storage, it expands building capacity. The outbound pallets are constructed by a high-speed robot that uses an algorithm to organize the product by store aisle to take the guesswork out of unloading trucks and speed up restocking.

The technology is not new. Canadian discount retailer Giant Tiger has been using a Symbotic robotic unit in its Johnstown, Ontario, distribution centre since 2018.

Read about the Symbotic system in action in our feature, “Friendly’s Robots”, about Giant Tiger’s operation in Johnstown, Ontario

In Walmart’s process now, product arrives at one of the company 42 regional distribution centres and is either cross-docked or warehoused until needed. The products are moved or stored manually.

When it’s time for the product to go to a store, someone is tasked with packing a 53-foot trailer in a human game of Tetris for transit. When the truck arrives at a store, our associates unload it manually and get the items where they need to be.

“This first-of-its-kind tech when applied at our scale is revolutionary because it gets products onto shelves for our customers even faster while saving time for our associates. The new way of unloading store-friendly palletized trucks will make the process faster and simpler for our associates, allowing them to spend more time with our customers,” said Joe Metzger, executive vice-president of supply chain operations at Walmart U.S., in a release.

Metzger added that the automation will reduce out-of-stocks and increase the speed of stocking and unloading, as well as offer the opportunity for its warehouse staff to learn new skills in working alongside robotics. “And because the technology decreases the need for our associates to handle freight, it removes one of the toughest aspects of supply chain work in material handling,” he concluded.