Plow is the result of a partnership with Manitoba companies Northstar Robotics Inc. and Airport Technologies Inc. (ATI)

March 15, 2019
by Inside Logistics Online Staff

March 15, 2019
by Inside Logistics Online Staff 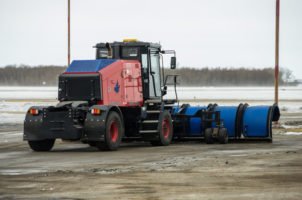 Otto is equipped with 3D LIDAR and RADAR that can sense its surroundings and detect obstacles.  The plow is also equipped with a fault tolerant wireless emergency stop system, a further safety enhancement.

“Our success is a direct result of bringing together partners who are committed to lead transportation innovation and growth.”

“Autonomous technology is changing how we work,” added Shawn Schaerer, president and founder of Northstar Robotics.

“It is exciting to partner with companies that are ready to adapt and pioneer this cutting-edge technology.”

“ATI is proud to be part of the team breaking new ground in snow clearing technology,” said ATI’s president, Brendon Smith. “We are excited to continue to find new ways to incorporate autonomous technology into our equipment.”