October 21, 2020
by Inside Logistics Online Staff

October 21, 2020
by Inside Logistics Online Staff 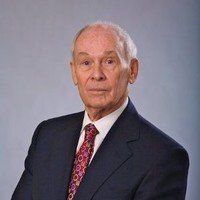 OTTAWA – Bob Ballantyne, president of the Freight Management Association of Canada (FMA), has been chosen asthe association’s Supply Chain Executive of the Year in 2020.

“Bob has demonstrated a long-term commitment and sustained leadership in the transportation and logistics industry in Canada throughout his long career. The Board felt that there is not a more worthy recipient of the 2020 Supply Chain Executive of the Year than Bob in recognition and in honour of his achievements,” said Gary Fast, vice-president, transportation, Canadian Tire, and FMA chair.

Ballantyne’s career in the transportation industry has spanned 60 years. During his 40-year career with Canadian Pacific Limited, he worked in the engineering, signal, operating and marketing departments. In 1976, he moved to Canadian Pacific Consulting Services as vice-president, where he had responsibility for marketing and supervision of railway and other transportation projects in various parts of the world.

Among his achievements, he was instrumental in the establishment of the Coalition of Rail Shippers, a group of 18 industry associations whose member companies represent a major segment of Class 1 railways’ customer base.

Ballantyne also represents Canada’s shippers on the board of directors of the Global Shippers Forum (GSF). He was elected the GSF’s inaugural chair when it was incorporated in 2011.

John Corey to take over

Ballantyne will step down as FMA president on December 31, 2020. He will continue to work with incoming president, John Corey, and Cindy Hick, FMA vice-president, to promote the interests of Canadian shippers.

“Transportation is of fundamental importance to the Canadian economy and working in the supply chain industry for many decades has been a satisfying and rewarding career,” Ballantyne said.

“It is an honour to have been named the 2020 Supply Chain Executive of the Year, and my thanks to the FMA Board of Directors and my colleagues, Cindy Hick, Forrest Hume, and John Corey for their support over many years.”

The FMA has been representing the freight transportation interests of Canadian industry since 1916. Its 65+ members include companies, both large and small, from most industrial sectors and from all across the country. Member companies contribute approximately $90 billion annually to the Canadian economy and purchase approximately $3 billion in freight services by truck, rail, marine, courier and airfreight.