November 14, 2016
by Inside Logistics Online Staff

November 14, 2016
by Inside Logistics Online Staff 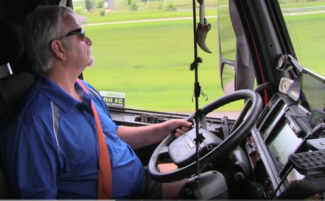 Toronto, Ontario–Most days in Paul Frederick’s 53 years on the road have been uneventful; which, in trucking, is usually just how you like them.

But throughout his career, the Gatineau owner-operator has come across more than a handful of dramatic situations, usually involving people who have been hurt or in dire need of help. Each and every time, Paul has answered the call without hesitation. In fact, he seems to save people as routinely as he performs a circle check.

It’s for that reason the company he hauls for, Brampton, Ontario-based Travelers Transportation, nominated him for the 2016 Bridgestone-OTA Truck Hero Award, which recognizes a truck driver who has exhibited courageousness, selflessness and integrity in the face of an emergency.

It was no contest. Frederick was named the recipient and handed the award at the OTA’s 90th annual executive conference in Toronto.

While Frederick has leaped into action many times throughout his career, it was a specific incident near Indianapolis that grabbed OTA’s attention. Frederick and his wife Carol, who was riding with him at the time, noticed a car heading the wrong way down the off ramp on the I-465. Within seconds it collided with an SUV which was exiting the highway and sent flying.

Paul pulled over and ran to the SUV driver who was shocked, but otherwise uninjured. He then made it to the crushed car, which had caught fire when he arrived, but he didn’t see anyone inside. Despite passerby’s pleading with him to retreat from the burning car, Paul pressed on. He pried open the backdoor and sifted through the deployed airbags in the front seat – but still, there was no one in sight.

Confused and his lungs filling with smoke, Paul then noticed a cane lying in the backseat. The pieces of the puzzle started to become clearer. Paul took another shot at the airbag, this time lifting it so he could see below the front seats. There, looking dazed up at Paul and lying motionless underneath the collapsed dashboard, was an elderly man. Paul kicked open the front door from the inside. He then went around from the outside and pulled the injured man out of the burning car to safety, just as the vehicle became overwhelmed by flames.

The man was in bad shape but conscious. A sergeant at the scene told Paul the crash victim had a decent chance to live because of his actions. Paul and Carol got back in the truck and drove off. To this day, Paul isn’t sure of the man’s fate, knowing only he was alive when he left.

“I think what he did was amazing,” says Jim Hicks, president of Travelers Transportation. “He’s always calm and cool. He doesn’t get too excited and seems to always know what to do. I’m glad it was Paul who was there that night.”

Paul says he doesn’t chase these moments. They just seem to happen no matter where he is – like when he rescued a young boy who was badly hurt and bleeding when a boat backed into the lad while he was swimming near a dock. Or when Paul’s outdoorsman version of “Spidey sense” kicked in when he encountered four ill-equipped novice hunters heading into the Quebec wilderness. When they never returned Paul used his instincts to track them down. He found them frozen and starving before guiding them back to camp.

“Paul is like a fulltime truck driver who moonlights as a superhero,” says Paul Dalcourt, National Account Executive, Bridgestone Canada. “Bridgestone is proud to call him the 2016 Truck Hero. We should all feel more secure knowing there are brave and selfless drivers like Paul out there on the road.”

Paul credits his instincts and ability to remain calm for his knack of rescuing people. He calls it a responsibility, which he believes was borne at a very early age when his own father saved him from drowning. He says he’s been paying it back ever since.

“Over his 53-year career Paul has repeatedly responded to emergencies and helped save lives,” says OTA president Stephen Laskowski. “Like a sixth sense, he’s at the right place at the right time when there are people in need. Maybe it’s coincidence. But more likely, it’s about who Paul is as a professional and as a person.”