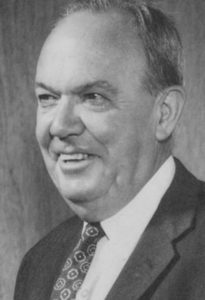 Celebrating its 100th birthday one year ago, Bullard’s lightweight, non-conducting hard hat design was sturdy enough to withstand many falling objects. This invention has since become a mandatory piece of equipment for protecting millions of workers around the world.

A graduate of the University of California at Berkeley, Bullard served in the U.S. Army in France during WWI. Once home, he returned to work at the E.D. Bullard Co. in San Francisco, founded in 1898 by his father, Edward Dickinson Bullard, to sell carbide lamps and mining equipment to gold and copper miners.

Realizing the need for greater safety within the mines, Bullard designed a hard hat for miners inspired by the steel doughboy helmet he wore as a soldier.

Bullard first produced the Hard Boiled Hat by alternating layers of canvas and glue, then steaming the stiff canvas to make it temporarily pliable. Next, he glued together overlapping layers of the canvas to form the shell, covered the shell inside and out with water-resistant shellac and added leather front and rear brims.

The Hard Boiled Hat met the miners’ needs and quickly spread to other industries. It was used by workers on both the Hoover Dam and Golden Gate Bridge projects. Bullard went on to patent several improvements to his original design, including an adjustable suspension system that distributes the force of a blow.

With the introduction of the hard hat, the Bullard Co. expanded and began manufacturing industrial safety equipment. Owned by the Bullard family and led by Edward W. Bullard’s great-granddaughter, Wells Bullard, today the company is a major manufacturer of personal protective equipment and systems that are marketed worldwide.