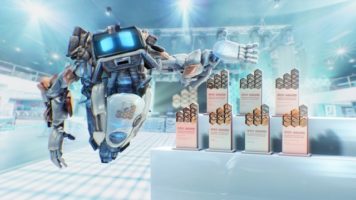 ISMANING, Germany – The International Intralogistics and Forklift Truck of the Year Award (IFOY Award) handed out the prizes virtually this year, in a Hollywood-style award ceremony on July 13, the evening before the Hannover Messe Digital Days tradeshow began.

An animation team created the flying robot “I-T20”, short for “IFOY Transformer 2020”, which transformed into the categories of the world’s largest intralogistics award during the ceremony. When the I-T20 “beamed” the trophies to the winners, they then appeared onscreen hoisting a real trophy and expressing their gratitude for the prize.

“Special times require special solutions, and transformation is the key to success. This year’s award ceremony shall set a visible sign for the power of transformation. It is dedicated to the best innovations in intralogistics, and moreover to the people who logistics happen,” said executive chairperson of the jury, Anita Würmser, at the award ceremony. 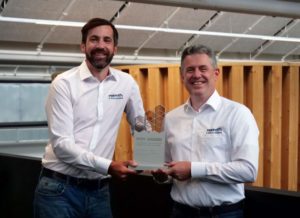 Bosch Rexroth won its first IFOY Award with its Locator – Laser Localization Software in the category Intralogistics Software. The localization software, based on laser distance measurement, uses a laser sensor to automatically map the environment, creating a basis for autonomous driving in intralogistics and production environments. 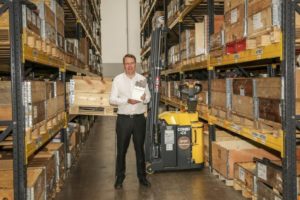 In the category Warehouse Truck Lowlifter, the compact and agile Combi-CS of Irish manufacturer Combilift convinced the jury. The pallet truck with a one-tonne load capacity and a lifting height of 2,500 millimetres operates in narrow aisles thanks to its patented multi-position tiller. 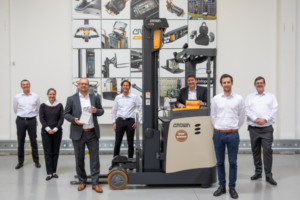 The ESR 1000 from U.S-based manufacturer Crown was the winner in the  Warehouse Truck highlifter category. The reach truck, with 1.6 tonnes lifting capacity and a lift height of 6,840 millimetres, impressed in the IFOY jury with its comfort,  and with a 25 percent faster lowering speed and better energy recovery than other reach trucks on the market.

The jury selected the autonomous tugger train TractEasy from the French manufacturer EasyMile in the category AGV & Intralogistics Robot. The electric tow tractor enables flexible automation of logistics processes both indoors and outdoors. With a towing capacity of 25 tonnes, it can safely drive up to 25 kmh in mixed traffic between cars, pedestrians and bicycles. Thanks to its ground clearance, the vehicle can also be used on uneven terrain or in difficult weather conditions.

Chinese manufacturer Sany won the IFOY in the category  Special Vehicle with its the SRSC45H9. The comfortable hybrid reach stacker offers lifting capacities in the first, second and third row of 45, 31 and 15 tonnes. According to an internal Sany test, increases in productivity are at least 15 percent higher than in the company’s own standard vehicle, and fuel consumption is 20 percent lower. A hybrid system lifts and lowers the boom with the spreader.

The 2.5-tonne RX 60 electric counter balanced truck of the Hamburg-based manufacturer Still won the Counter Balanced Truck category. “Never before, an electric forklift truck has been so productive in the IFOY Test and such a serious alternative to combusters. With the RX 60-25 in the high-performance version, Still breaks all records and sets the bar for electric forklift trucks in this segment much higher,” the jury underlined.

Start-up of the Year went to Wiferion, formerly Blue Inductive, for its etaLINK 3000. The first 100-percent contactless wireless charging system for industrial electric vehicles is fully operational and enables fast and flexible installation using floor plates that do not require any infrastructure.

The International Intralogistics and Forklift Truck of the Year (IFOY) AWARD honours the best intralogistics products and solutions of the year. It has established itself as an indicator of economic efficiency and innovation and is regarded as the leading innovation award in intralogistics due to its technical expertise.

The decision is based on the three-stage audit, consisting of the IFOY test protocol comprising around 80 criteria, the scientific IFOY Innovation Check and the jury test. The decisive factor is that the nominees are not compared with each other, but with their competitors’ equipment on the market.

At the IFOY test days in February 2020 at the Hannover Exhibition Grounds, a total of 16 vehicles and solutions from 15 manufacturers underwent the IFOY tests.

In addition, jurors and their teams of advisors from the business world travelled to the event to assess the finalists themselves before they cast their vote. For the first time, potential buyers were also on site at the Test Camp Intralogistics.

Voting is carried out annually by an independent international jury of specialist journalists. The IFOYs are sponsored by the VDMA’s Materials Handling and Intralogistics Association. The awards’ partner is Hannover Messe. CHEP is the pallet partner, and the technology partner is the battery charging specialist Fronius. The IFOY organization is based in Ismaning near Munich, Germany.