The automaker has shipped nearly 350,000 twenty-foot equivalent container units through the Port of Savannah 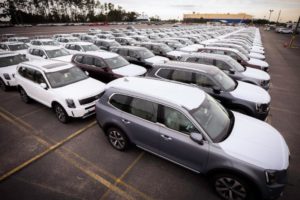 “Kia is one of our largest customers at the Port of Savannah, and a stellar example of the kind of advanced manufacturing going on across Georgia,” said GPA Executive Director Griff Lynch.

“At Georgia Ports, we are proud to support the positive impact Kia has on the state’s economy.”

Over the past decade, the automaker has shipped nearly 350,000 twenty-foot equivalent container units through the Port of Savannah in support of its manufacturing plant near West Point, Ga. As one of GPA’s largest container customers, Kia’s volumes support thousands of jobs throughout Georgia’s transportation and logistics supply chain.

“From Kia’s initial investment of more than $1 billion to today, KMMG has proven a valuable asset to the strength and diversity of our economy,” said Georgia governor Brian Kemp.”

With the recent export of the first Kia Tellurides via Brunswick, the carmaker is opening up new global markets for goods made right here in Georgia.”

Just last month, KMMG president and CEO Jason Shin hosted Kemp for a tour of the auto plant. Kemp was there to celebrate the start of production of the all-new Kia Telluride SUV. With the Telluride, KMMG makes its first major foray into the export trade. Kia’s Georgia production had previously served only North American buyers.

“For more than 10 years, the Georgia Ports Authority and KMMG have had a world-class partnership that has only strengthened with time,” said Shin.

“From the first production equipment arriving at the Port of Savannah in 2008 to the first Kia Telluride exports that left the Port of Brunswick this past February, KMMG, the Georgia Ports Authority and the State of Georgia have maintained a strong bond.”

In other business, the GPA board reviewed fiscal year to date results (July 2018 – Feb. 2019), which included 8.8 per cent growth in container volumes, adding 239,022 TEUs compared to the same period last year, for a total of 2.97 million TEUs.

“Savannah has become the U.S. Southeast’s busiest gateway for containerized trade, and Brunswick is home to the largest auto facility in all of North America,” said GPA Board chairman Jimmy Allgood.

“The growth we have experienced in recent months and years is a tribute to the incredible teamwork of the men and women of the Georgia Ports Authority, as well as our many partners in the International Longshoremen’s Association, stevedores, ocean carriers, trucking and rail.”

Roll-on/Roll-off cargo at Colonel’s Island Terminal in Brunswick and Ocean Terminal in Savannah is up 6 per cent, or 24,300 units of cars, trucks and tractors, for a total of 428,303 units for the fiscal year to date.

To keep up with Savannah’s container growth, the board approved the purchase of 20 rubber-tired gantry cranes. When the RTGs are commissioned in late 2020, they will bring the Port of Savannah’s fleet to 178.

While the GPA has seen record cargo totals for the fiscal year to date, the Authority experienced a decline in February container volumes of 8.5 per cent (29,052 TEUs) for a total of 312,042 TEUs.

“Last month brought an end to the Authority’s 27-month run of year-over-year container growth, but our outlook for March and the remainder of the fiscal year is strong,” Lynch said.

“We are pleased with the direction and pace of cargo growth at our terminals, and we’re making the preparations necessary to continue handling new business without congestion.”