July 6, 2021
by Inside Logistics Online Staff

July 6, 2021
by Inside Logistics Online Staff 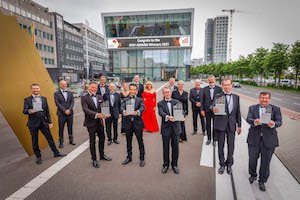 Winners show off their awards in Dortmund, Germany.

In 2021, 14 international companies entered 17 products and solutions in the ninth round of the award.

“The winners of the IFOY Award 2021 have once again demonstrated that businesses can be innovative and forward-thinking even in persistent pandemic times and bring top products to the market that have a significant effect on the future of intralogistics,” said jury chairwoman Anita Würmser.

Cargotec won its first IFOY Award in the “Special Vehicle” category with the second generation of its Moffett E4-25.3NX, the world’s first fully electric truck-mounted forklift. According to the jury, the emission-free and low-noise truck is unique in its class. It has a three-wheel drive as well as numerous safety features and convinced the jury in the IFOY test with its economic efficiency and high performance.

BMW subsidiary idealworks won in the category “Automated Guided Vehicle (AGV)” with its iw.hub. Originally developed for in-house use, the autonomous mobile robot (AMR) is now freely available on the market and can be implemented in two days without any structural adjustments. The AMR, which set an example at the IFOY Test Days with its flexibility and other features, also scored points with its competitive price.

The Smart Pallet Mover (SPM) from Interroll Group won in the “Special of the Year” category. The new mobile robot solution for the automation of pallet transport for production and order picking convinced testers and the jury not only with its high degree of innovation, but also with an outstanding cost-benefit advantage.

arculus took the category “Intralogistics Software” with its manufacturer-independent fleet management system arculus Fleet. The system enables the operation of AGVs from different manufacturers in one area via a VDA5050 interface and opens up new possibilities for the mixed operation of automated warehouse vehicles, which was until recently unthinkable in practice.

This year’s award in the “Integrated Warehouse Solutions” category went to Still. The Hamburg-based intralogistics company made it to the top with its project for Danfoss Power Electronics’ new production warehouse. Still implemented a coordinated solution consisting of three automated series industrial trucks, the smart iGo insights tool and the ELOshield safety system for its Danish customer. According to the jury, the project is an impressive example how automated warehouses will be controlled, monitored and analyzed in the future.

Start-up of the year

Five young companies qualified for the final round in the “Start-up of the Year” category this year. In the end, Volume Wave from Volume Lagersysteme came out on top. The world’s first fully automated pallet shuttle warehouse with individual access to each storage location convinced the jury with its fundamentally new design principle as well as its professional implementation. Scientists described the extremely space-saving solution in the IFOY Innovation Check as “impressive”.

The IFOY Award recognizes the best intralogistics products and solutions of the year. Awards are based on a three-stage audit, which consists of the IFOY test protocol with around 80 criteria, the scientific IFOY Innovation Check, and the jury test. The most important detail is that the nominees are not compared with each other, but with their competitors’ products on the market.

At the IFOY Test Days in March 2021 at the Messe Dortmund exhibition centre, all nominees went through the IFOY test series. For the second year in a row, around 100 potential buyers were also on site at the Test Camp Intralogistics.

The winners of the IFOY AWARD are chosen annually by an international jury of trade journalists. The IFOY Award is sponsored by the Association for Materials Handling and Intralogistics within the VDMA.