Douglass earned a gold medal in the Assembly category during the annual international competition held last month in Takahama, Japan. Douglass beat competitors from other Toyota group companies based in China, France, Italy and Sweden, as well as additional U.S. participants from The Raymond Corporation.

“We couldn’t be prouder of Kim’s significant achievement and the way she represented Toyota Material Handling in this intense global competition,” said Tony Miller, TMH Senior Vice President of Engineering, Operations & Strategic Planning. “Kim never strayed from our core values and always approached the competition with respect and humility.”

Douglass, who has been with Toyota for 13 years, participated in TMH’s internal competition and was eventually selected as the company’s representative for the Assembly category. From there, she challenged competitors from Raymond’s Greene, New York, and Muscatine, Iowa factories in a regional competition prior to the big show in Japan. Douglass spent a full year in TMH’s training department as she prepared for the competition, practicing for several hours every day while also helping train others in the dojo area. 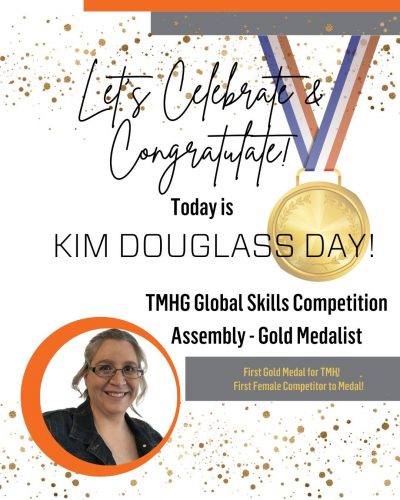 It culminated in the nine-day trip to Japan last month – Douglass’s first trip outside of the U.S. When it was finally time for the big day, Douglass did her best to calm the nerves.

“My thought was ‘This is just practice.’ I’m at home practicing.’ I kept saying it over and over to myself for three days,” Douglass said. “At one point, I glanced at the Japanese representative competing next to me, and I was like, ‘Nope, I can’t even look at him. I have to focus on my work only.’”

Douglass finished assembling the plates in three minutes and 16 seconds, and completed the torquing portion in eight minutes to earn the gold – much to her surprise.

“I looked at my coach and said ‘Really!?’” Douglass recalls. “I did not expect to win. I was hoping to at least place, but I did not plan on winning gold.”

Douglass said dozens of people congratulated her on the win – including many women sharing that they feel a sense of ‘girl power’ as a result of her achievement. But Douglass’ most memorable interaction came from a fellow competitor – Paige Frantz, a female representative from Raymond Muscatine who finished third. The duo developed a bond during the regional competition that continued as they pushed each other to get better.

“One of the things I realized when we went through the tour in Takahama was there were not many women on the lines. So the fact that we’re showing everyone that women can do it – it’s awesome.”

Douglass’ win is a testament to TMH’s industry-leading reputation of dedication to innovation, quality and service. The full-line material handling solutions provider and North America’s leading manufacturer of forklifts maintains a constant focus on delivering the highest quality and believes in the concept of ‘Kaizen’, or continuous improvement, in every aspect of its business.

One area of improvement that TMH is especially focused on is encouraging more women to pursue a career in the material handling industry which makes Douglass’ win even more significant for the organization. The Toyota Women’s Impact Network, or T-WIN, plans to use Douglass’ achievement as a tangible example of what they hope to see more of in years to come.

“Kim’s achievement is more than just a win for TMH or even for Toyota; it’s a win for all women in the material handling industry,” said Tracy Stachniak, TMH Vice President of Human Resources, Training & Development. “We are committed to supporting and promoting diversity and inclusion in every way we can. Kim’s gold medal says one thing loud and clear – women can do it, too.”

The company celebrated Douglass’ gold medal with a special campus-wide day in her honor – coined Kim Douglass Day – complete with congratulatory signs and banners, a cafeteria offering based on her favorite meal, and gold cookies with red, white and blue ribbons attached to them.

“The big thing I learned through this whole experience is just not to be afraid,” Douglass said. “I never entered the skills competition before out of fear. I didn’t know what to expect, so I didn’t do it. Ultimately, I decided to go for it because I feel like I’m good at assembly and felt like if I didn’t try, I was going to regret it. I’m so happy I did. I’m going to apply that mindset to other parts of my life and continue to take chances on myself.

“I’m so thankful for everyone that supported me throughout this process, especially my coach Matt Heuer for always encouraging me to do my best.”