by Inside Logistics Online Staff June 7, 2021

Last month, Toyota Material Handling (TMH) reached a manufacturing milestone with the production of the 750,000th forklift to roll off the line at the company’s 1.5 million-square-foot factory located in Columbus, Indiana. 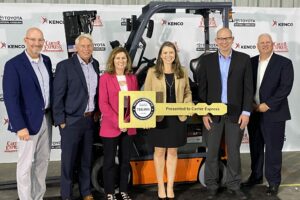 On Thursday, TMH and its local dealer – Kenco Toyota-Lift – presented the forklift and a commemorative key to customer Carter Express during a special ceremony at Carter’s training facility in Huntsville, Alabama.

“On behalf of Toyota Material Handling, I want to extend my appreciation to Carter Express for selecting us as your material handling partner,” TMH vice-president of engineering Josh Linnemann told the audience.

“It is loyal customers like you that allow us the opportunity to celebrate this event today.”

“It’s really an honour to have the opportunity to host an event like this, especially with a customer like Carter Express that’s so connected to Toyota on both the material handling and automotive side,” said Kenco Toyota-Lift president Jeff Burns.

Carter Express will deploy the 750,000th Toyota forklift and more than 100 other units at MTM’s US$2.3B facility where the recently announced Toyota Corolla Cross SUV will be built. MTM also plans to manufacture electric vehicles at the plant in the future.

“For well over 10 years, Toyota Material Handling has been our forklift manufacturer of choice,” said Carter Express president and CEO Jessica Paugh Warnke.

“We have Toyota to thank for a lot of our growth. We’re excited to be here to celebrate this amazing achievement by Toyota Material Handling. We are very proud to be the recipient of this 750,000th forklift manufactured here in the United States, and specifically our home state of Indiana.

“Business runs best and is really at its most fun when you can create mutually beneficial partnerships with your vendors and customers. We’re so blessed to have that sort of partnership with Toyota Material Handling and Kenco Toyota-Lift.”

The 750,000th forklift is an electric model launched by TMH last year, and the first to be completely designed and developed by TMH’s engineering team in Columbus. The model offers limitless special designs to meet wide-ranging customer demands.

“By engineering products closer to our customers, we ensure their voices are heard, and their needs are reflected in every detail of our designs,” said Linnemann, who led the development of this electric model.