by Inside Logistics Online Staff July 5, 2018 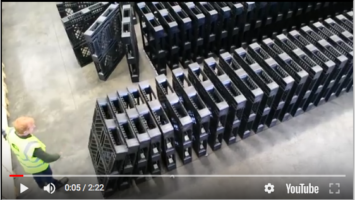 WATCH THE VIDEO OF THE WORLD RECORD

It all came from an idea the head of marketing, Craig Dunn, had while on holiday. When he saw some of the company’s pallets on a farm on their side, he thought they looked like dominoes. He wondered what it would be like to topple 1,000 of them.  When he found out there was an existing record he knew he had to break it.

“I thought he was crazy, to be frank,” Dale Paterson, managing director of export, explains. “It’s marketing’s job to come up with ideas to generate interest in our products. I took a lot of convincing that this was worth the effort and disruption. I’m glad I was persuaded.”

The team set a date and had to come up with a plan to clear the internals of their warehouse, set up the attempt then clear it all away within just six hours.  Some staff started at 5.30 a.m. that morning to make sure it all happened.

Breaking into teams of two they started at either end of their warehouse and met in the middle with precision. One slip would have meant starting all over again.

The celebrations when the 1377th pallet fell were loud.

Official Guinness World Record verification was given on 4th June,2018

They eclipsed LIDL Spain – the previous holders – by over 100 pallets.

Watch the time lapse of the setup here.