February 25, 2020
by Inside Logistics Online Staff

February 25, 2020
by Inside Logistics Online Staff 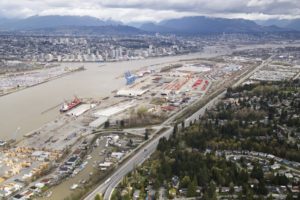 In 2016, DP World partnered with CDPQ to create a US$3.7-billion platform to invest in ports and terminals worldwide. Since then, the partnership has leveraged DP World’s strong track record in the port sector and CDPQ’s in-house infrastructure expertise to grow a high-quality portfolio of 10 ports and terminals across the globe, including locations in Canada, Chile, the Dominican Republic and Australia. DP World holds 55 percent of the platform and CDPQ holds the remaining 45 percent.

Fraser Surrey Docks was founded in the early 1960s and now operates more than 1,200 metres of berth, 189 acres of yard and is one of the region’s major steel import terminals. It moves approximately one million tonnes of agriproducts annually and serves several container lines, handling over 350,000 TEUs in 2019.

“DP World strives to create positive impacts for our people, our customers and the communities in which we operate,” said DP World (Canada) Inc. General Manager, Maksim Mihic.

“The addition of the Fraser Surrey Docks will create new jobs, and provide overall economic benefit to our community, the Province of British Columbia and to Canada as a whole.”