April 11, 2019
by Inside Logistics Online Staff

April 11, 2019
by Inside Logistics Online Staff 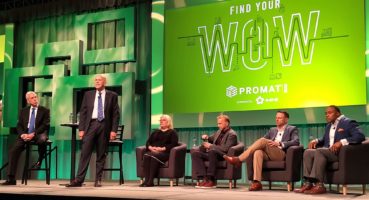 George Prest presents the results of the 2019 MHI Annual Report with Scott Sopher from Deloitte and an industry panel.

Eight out of ten survey respondents believe digital supply chains will be the predominant model within just five years. The survey results also suggest that investment in supply chain innovation is at a critical inflection point, with a trend of declining investment from 2015 to 2018 being more than countered by the 95 per cent increase in projected spending for 2019.

Manufacturing and supply chain professionals are facing many challenges but, according to the report, the top one continues to be hiring qualified workers (65 per cent).
This year’s report provides updates on the innovative technologies MHI predicted would have the most potential to transform supply chains. The report also covers the potential of these technologies to disrupt the industry as well as their adoption rates and common barriers to adoption.

The 11 technologies covered in the report are:

These 11 technologies work together to create next-generation supply chains that can meet these challenges because they are digital, on-demand and always-on.

“The pace of supply chain innovation over the six years of our survey is truly astounding, creating real and measurable competitive advantage for early adopters,” said George Prest, CEO of MHI.

“With supply chain complexity showing no signs of slowing, the risk of inaction is only growing. Leading manufacturing and supply chain executives agree that technology is the key to future success.”

The top technologies respondents say can be a source of either disruption or competitive advantage are:

The top three barriers to adoption of these technologies are:

A highly-skilled and increasingly digital supply chain workforce is needed to implement these technologies. This has been a theme in all six annual reports and the talent gap is growing as the adoption of these technologies increases.

The top critical skills needed to compete in the next-generation supply chain according to the survey and consistent with previous years; analytics/modeling/visualization (40 per cent), strategic problem solving (37 per cent) and general business acumen and cross-functional knowledge (31 per cent).
The findings in this report are based on survey responses from over 1,000 manufacturing and supply chain industry leaders from a wide range of industries. Sixty percent of respondents hold executive-level positions such as CEO, Vice President, General Manager, or Department Head.  Participating companies range in size from small to large, with 59 percent reporting annual sales in excess of $100 million, and 10 percent reporting annual sales of $10 billion or more.
Print this page