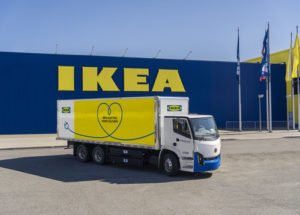 Officials from companies with private fleets of trucks are urging governors across the United States to embrace a rule meant to speed the adoption of zero-emission trucks and reduce a potent source of greenhouse gases spewed from the large commercial vehicles.

In a letter released Friday, representatives of companies including IKEA, Nestle, Siemens, Etsy, eBay, Ben & Jerry’s and Unilever joined with environmental activists and investors to call for the wide adoption of the Advanced Clean Trucks rule. Transportation is a leading cause of greenhouse gas emissions in the U.S., with trucks being one of the top culprits, activists said.

The rule requires manufacturers of medium- and heavy-duty vehicles to increase sales of zero-emission models over time in states where the policy is put in place. As production ramps up, the cost to manufacturers and buyers should come down, advocates said.

Supporters of the rule say companies increasingly are demanding clean trucks and vans to help meet climate and pollution goals and to save on the costs of fuel and maintenance. Approval of the rule by state governments could help give an added nudge to truck makers, backers said.

“The ACT rule will help bring down costs for zero-emission medium- and heavy-duty vehicles by requiring manufacturers to increase model availability to meet the needs of fleet operators and driving investment in clean transportation research and development,” the companies and advocacy groups said in the letter.

“This will enable cost-effective electrification of commercial vehicles at the pace and scale needed to meet climate and air quality goals,” they added.

The switch to zero-emission trucks also will help reduce pollution in lower-income neighborhoods, many of which border highways, major roads and shipping centres, and where residents often have health problems like asthma, advocates said.

The rule has already been adopted in California and is being considered in several other states, including Oregon, Washington, New Jersey, Massachusetts, New York and Colorado.

“Medium- and heavy-duty vehicles are an essential part of the logistics networks that millions of Etsy sellers rely upon to deliver items to their buyers around the world, but these vehicles contribute disproportionately to air pollution and global warming emissions,” Chelsey Evans, senior manager of sustainability for Etsy, said in a statement.

“Widespread adoption of zero-emission vehicles, including through the Advanced Clean Trucks Rule, is key to combating climate change.”

The letter was organized by the nonprofit group Ceres.

States have begun to acknowledge the pollution linked to cars and trucks and its effect on the climate.

The governors of three New England states and the mayor of Washington last year signed a regional pact aimed at dramatically reducing transportation pollution, an agreement they hope other states will eventually join.

The Transportation and Climate Initiative Program is designed to reduce motor vehicle emissions by at least 26% by 2032 by requiring large gasoline and diesel fuel suppliers to purchase “allowances” for the pollution caused by the use of the fuels they sell in the region. Opponents say that could drive up gas prices.

In New England, transportation is responsible for over 40 percent of greenhouse gas emissions.