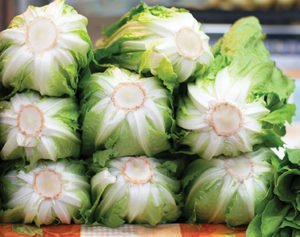 Hail Caesar! The standby salad made with romaine lettuce has been under fire lately with an outbreak of E. coli contamination sickening several dozen people in parts of Canada and the U.S. late last year.

With the holiday eating season approaching both Canadian and U.S. health agencies warned people against consuming the greens, and grocers pulled the product from store coolers. As the year waned, at least one outbreak was traced to a specific farm in California, and the public was once again free to eat the lettuce without fear of becoming sick, providing they only ate romaine that was properly labeled with the location and date it was harvested.

The ease with which greens can carry and transmit potentially dangerous infections like E. coli has prompted Walmart to introduce another of its supplier mandates. This time the retail giant is requiring leafy greens suppliers to join in a blockchain-enabled initiative to track their product almost instantly.

By the end of January 2019 Walmart’s suppliers were required to adopt IBM’s Food Trust blockchain network. They will then have until September 2019 to bring their own suppliers on board to deliver complete end-to-end tracking capability.

Until very recently, tracking produce has been both hit-and-miss and unwieldy. In its own tests, Walmart took a full week to trace a package of fresh mangoes back to its source in Mexico. Using blockchain, the process took 2.2 seconds.

Blockchain is being touted as a solution to the problem of product traceability, not just for produce, but across the supply chain. Its advantage is that its digital ledger technology provides a permanent, immutable record of an item’s progress from point to point along the chain of custody.

As it moves along, the ledger is available to all parties for sign off, and nobody can change what’s been written. IBM’s Nigel Gopie said in a recent blog post that it’s like writing in pen – you can’t hide what’s been set down.

But while the technology has promise, some are expressing doubt about its readiness for widespread use. Eric Piscini, CEO of Citizen’s Reserve, a blockchain technology provider, for example, says that Walmart’s new mandate for leafy greens suppliers is not really blockchain in action.

“Walmart is really just asking suppliers to use its own platform,” he said in an interview. “It’s not really blockchain because it’s not run without oversight.”

Piscini’s point is that true blockchain will have no central oversight, and will operate on a decentralized platform to execute smart contracts. And currently we are a long way from that goal.

Right now organizations like the Blockchain in Transportation Alliance (BiTA) are working to create an environment where the technology can be adopted. And while his company takes part in the alliance, education of players in the supply chain is the primary goal, not the creation of the platforms, Piscini said. Secondly, regulatory hurdles are being addressed with respect to the technology. And third, a mindset has to be developed that puts trust in a decentralized model.

“It takes time to shift a mindset,” Piscini said.

Meanwhile, mandates like Walmart’s, whether ‘true’ blockchain or not, are serving a purpose. Precise, real-time tracking across food supply chains will help to alleviate concerns about contamination and will also help address significant issues of food waste, counterfeiting and mislabeling.