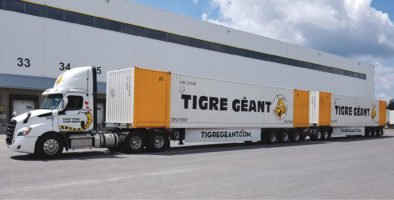 Giant Tiger is looking to boost productivity by expanding the physical size of equipment in its network.

“We cube out way before we weigh out,” explains James Johnstone, associate vice-president – transportation, referring to cargo that includes things like fashion items, towels, pillows and stuffed animals.

Fifty such units are already in service, but others are scheduled to set sail from China on Dec. 27.

The 53-foot containers are handled through a transload facility in Vancouver. From there a team cycles them to Montreal. Goods destined for Brampton, Ontario may even move by LCV.

All of the chassis are specified with fuel savings in mind, which means using aerodynamic skirts, along with aluminum wheels, super-single tires, and disc brakes. The boxes themselves are closer to a U.S. specification because they’re essentially dead weight when empty.

“[We did] everything we could to cut weight down,” Johnstone says. Using fixed 53-foot units rather than extendable versions means there’s no slider to worry about greasing or failing, he adds. “It allows us to add a skirt on a spring-loaded arm.”

Loads weighing 30,000 to 35,000 lb. would be considered heavy, but there are provisions for even heavier loads.

“The only challenges are getting them into the port, and it’s a mad dash getting everything off the ship,” he says.

Because of shipping limitations, the 53-foot containers arrive on smaller ships, and are lashed to the decks and pulled off with cranes. In contrast, 40-foot containers are moved about with massive gantry cranes.

Another Canadian retail giant, Canadian Tire, was actually the first domestic business to deploy 53-foot containers, and it has since begun using 60-foot units.

“We have built the largest private fleet in Canada, with over 7,000 units in operation,” says Gary Fast, Canadian Tire’s vice-president of transportation, referring to the 53-foot containers.

The retailer has also taken its supersized containers to the next level, becoming the first “anywhere” to use a 60-foot intermodal container.

Canadian Tire now has 153 of the 60-foot units in service, and plans to grow the fleet to 600 such containers by the end of 2021. In total, Canadian Tire is in the process of adding another 1,000 containers to its fleet – a combination of 53- and 60-foot units manufactured in China, meeting a Canadian specification.

While Canadian Tire deployed 53-foot containers in LCV configurations over the road, Fast notes, “not all roads are practical for this application.”

Still, the 53-foot container has been Canadian Tire’s standard, and “poses few challenges, with only a handful of retail locations unable to accommodate deliveries from these units,” Fast says.

The container chassis specified by Canadian Tire are primarily extendable from 40 to 53 feet, or 40 to 60 feet long. The most recent chassis are specified with roll stability for LCV operations, and the retailer specifies 100 percent hot-galvanized chassis for corrosion resistance rather than painted steel.

The containers themselves are shot blasted and a zinc shop primer is used to resist corrosion.

“Moving and external parts such as the hinge, handles, locks and all fasteners have additional galvanization and zinc plating specs,” Fast says. “We line our container walls with plywood and install track to make it easier for our distribution centre teams to secure loads.”