February 18, 2015
by Inside Logistics Online Staff 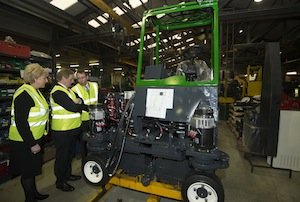 February 18, 2015
by Inside Logistics Online Staff

Monaghan, Ireland—Combilift Ltd. is to invest $50 million over the next two years in a new manufacturing facility in Ireland, which will also create 200 additional jobs over the next five years. This announcement was made by Irish Prime Minster Enda Kenny along with the Irish Minister for Jobs, Enterprise and Innovation Richard Bruton on a visit to Combilift’s current headquarters in Monaghan, Ireland on Friday February 6.

This expansion will enable Combilift to proceed with its plan to double its current $190 million turnover over the next five years. The majority of the 200 new jobs to be created will be for skilled technicians and design engineers and a further 200 jobs will also be created during the two year construction period of the new facility.

Combilift has recently purchased 100 acres of industrial zoned land where the new purpose-built, 430,000 sq ft., greenfield manufacturing site will be built.  This will include a dedicated Research and Development building, adjoining administration offices and will be more than double the size of the company’s present manufacturing facilities.

Combilift is best known for its wide range of multi-directional forklifts, Aisle-Master articulated forklifts and other innovative material handling solutions such as the Combilift Straddle Carrier designed to handle large containers and over-sized loads. The company was set up by CEO Martin McVicar and Technical Director Robert Moffett in 1998 and has produced in excess of 24,500 units since 1998. It currently employs over 300 people at its two facilities and products are exported to over 75 countries.

Commenting on this announcement, Martin McVicar said:  “with this greenfield investment and sufficient land available on the new site for future expansion, Combilift is committed to continuing its organic growth in Monaghan, Ireland for many years to come”.

Since 2005, Combilift USA has been headquarted in Greensboro, North Carolina. Combilift has delivered over 5,000 units in North America since selling its first truck in the USA in 1999 to a company named Southeastern Metals Manufacturing Co Inc. in Jacksonville, Florida.