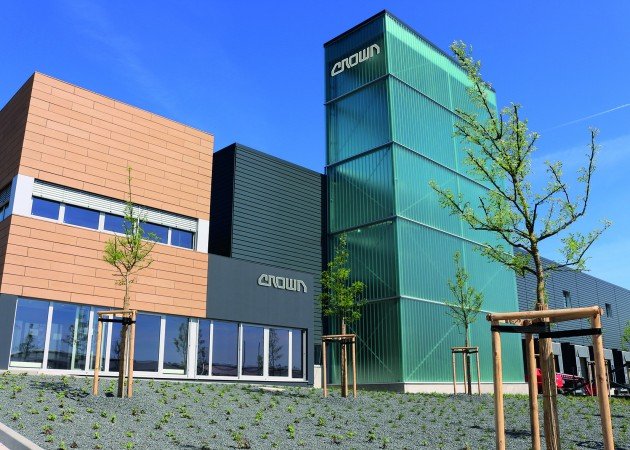 MUNICH, Germany—Crown Equipment opened a new production facility in Roding, Bavaria (Germany), in early July. The opening ceremony was attended by employees and guests, including local politicians and business partners. With a new production hall and office premises covering a total area of nearly 12,000 sqm (approximately 129,000 square feet), Roding is one of the key production facilities in Crown’s global manufacturing network.

While the company will continue to operate the existing plant located nearby, the new facility will enable the lift truck manufacturer to significantly expand its European production capacity. Just last year, Crown opened its new European headquarters in Feldkirchen and a new parts center in Pliening, both located near Munich. The parts centre handles the distribution of spare parts across the entire EMEA region. The new Roding plant represents Crown’s third major investment in Germany to support the company’s ongoing growth in Europe.

In his speech at the opening ceremony, Franz Reichold, mayor of Roding, praised the manufacturer’s commitment to the region. “Innovative, flexible, focused on modernization – these are the code words that best describe our business world. And they’re also the words that best describe Crown. Crown was prepared to both invest in the company and stay loyal to the town of Roding. On behalf of the townspeople, I would like to extend my sincerest thanks,” said the mayor.

Ken Dufford, Crown vice president, Europe, said, “Our new production facility in Roding is a milestone in the history of Crown in Europe. Not only is the building a triumph of architectural design, embodying state-of-the-art production technology and functionality, it also conveys a powerful sense of high-tech potential, demonstrating that Crown has plans extending far into the future.”

Crown has been manufacturing products in the Bavarian town since 1986. What first began as a production site for hand pallet trucks and single components is now a major facility producing large numbers of forklift models for the EMEA region and other global markets – from pallet trucks and low-level order pickers to reach trucks with lift heights of up to 13 meters (approximately 43 feet). Among the many products manufactured in Roding are the prize-winning ESR 5200 Series reach trucks and the popular GPC 3000 Series order pickers. Together with Crown’s innovative QuickPick® Remote order-picking technology, the GPC 3000 trucks earned the prestigious IFOY Award in May 2014.

The Roding plant is also a training venue. Every year, large numbers of people are trained here in many different areas. Devised in close collaboration with local vocational colleges, the company’s work-study training programs help trainees build a solid foundation of practical and theoretical skills.