by Inside Logistics Online Staff March 11, 2021 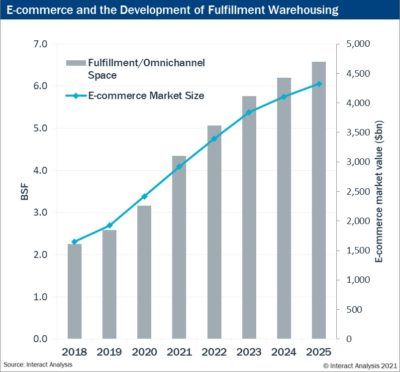 The warehouse and fulfillment sector is projected to see double-digit growth over the next five years.


According to research recently published by Interact Analysis, the e-commerce habit brought on by the Covid-19 pandemic has been “embedded for the long term”. Although demand is likely to flatten out as the virus is brought under control, warehousing and fulfillment centers will continue to play a key and growing role in the world of retail.

North America and Europe have a disproportionately high quantity of warehouses relative to their population. However, the burgeoning middle class and demand for retail goods in developing countries will mean that by 2025 China, the U.S., Japan, India, and Germany will account for more than 50 percent of the global warehouse building stock of 180,000 units.

E-commerce in the U.S. accounted for 4.5 percent of total retail sales in 2011. This figure rose to 10 percent in late 2019, then rocketed to 15 percent in less than a year during the pandemic.

Big players have made spectacular gains, with Amazon in February 2021 reporting its highest ever quarterly sales, surpassing US$100 billion. Meanwhile Walmart’s online business was up 79 percent in the third quarter of 2020, and Target saw its eCommerce sales boom by 154 percent in the same period.

Third-party logistics and general merchandise account for 60 percent of warehouse demand and will be responsible for approximately 4.5 billion square feet of additional space over the next five years.

These increases have been replicated across the globe, and are predicted to continue, though with some flattening of the curve, when the pandemic has receded. Online grocery sales are currently overwhelmingly fulfilled in-store as opposed to in warehouses, however overall fulfillment warehousing space, driven by general merchandise sector, is set to top six billion square feet some time in 2025.

Globally, it is estimated that the warehouse sector employed the equivalent of 8.5 million full-time employees in 2020 and is forecast to grow to nearly 13 million by 2025.

“While many industrial and service sectors continue to reel from the effects of the Covid-19 pandemic, warehousing and fulfillment centres are a real growth area, with staffing set to increase by 50 percent by 2025,” said Jason dePreaux, principal analyst at Interact Analysis.

“There has been a surge in automation projects caused by labour shortages in some markets. Yet 60 percent of all warehouses are in regions where the cost of labour is under $10 an hour and automation has yet to gain a firm foothold. As developing economies advance, which they inevitably will, we can expect to see major growth in automation in these regions too.”