How Lowe’s made a massive move look smooth

It's surreal to be in a building this size, Paradis recounted.

Have you ever wished to live in your neighbour’s bigger, fancier house across the road but could never justify the expense?

Then they lose their jobs and suddenly the house is on the market, at a bargain price. Would you swoop in, make a deal and get set to move in?

Home improvement retailer Lowe’s Canada did just that. Its neighbor was Target; the two companies had DCs a stone’s throw apart in Milton, Ontario. In a lucky coincidence, when Target folded its Canadian business and turned tail, Lowe’s was ready for a move.

Lowe’s not only picked up Target’s 1.3-million square foot Milton DC, it also acquired the leases of 13 Target stores across Canada, all for a total purchase price of approximately $151 million.

And on December 1, 2015 Lowe’s celebrated the grand opening of its new Regional Distribution Centre in Milton, and MM&D was privileged to be there.

This is the story of how the retailer decided to move into the neighbour’s digs, and the challenges they overcame to get there in less than a year. 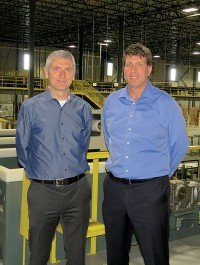 “It is quite surreal, actually, to be in a facility this size,” said Mario Paradis, Lowe’s senior director of supply chain and logistics. “When we started [in Canada] in 2007 we had 300,000 square feet. We moved into our facility on James Snow Parkway in February 2013 and doubled the size to 625,000 sqf, and then nearly doubled overnight again coming into this facility, so it’s a pretty unique experience.”

The new building has room for 70,000 product locations, 197 dock doors, including 97 loading bays, of which 66 are conveyor fed. And it’s massive. It takes employees five minutes to walk to their breaks, and it’s probably a couple kilometres to walk around the perimeter.

Lowe’s inherited Target’s state-of-the-art automation system, complete with truck de-stuffers, 10 de-palletizing stations and six automated receiving doors. The conveyors move at a blistering 630 feet per minute. In fact, Lowe’s lone Canadian DC is the only one of its 17 across Canada and the US that has both inbound and outbound automation.

It’s considerably bigger and fancier than the previous location, meaning there were some adaptations required in the move. But there was never any doubt that it was the right decision.

Back at the start of 2015 Lowe’s knew it that by the end of 2016 it would have considerable capacity challenges at its DC. The process of analyzing the network and looking at options had already begun when the announcement was made that the Target building would be available.

“We added it to the analysis model,” Paradis said. “After several weeks it shot up to being the front runner as we started to focus on what would be the value of a building like this if we had to build it from scratch.”

They looked at the network, transportation, all the usual factors, and also found that the employees and community support were important deciding factors in staying put in Milton.

Not that the building was perfect.

“If we had to build it ourselves we would design it somewhat differently,” Paradis said. “But it is based on the land that you have, the layout that fits. However, it’s really like the typical Lowe’s US DCs that are similar in size and fully automated.”

The old DC had zero automation, so managers and coaches were sent to a Lowe’s facility in Pennsylvania to be trained on the same Intelligrated system in use there.

Intelligrated was brought in to do a complete analysis of the system since it had been sitting idle for 11 months. Their recommendations were mainly for preventive maintenance that was completed before the move took place.

An Intelligrated rep also stayed on site throughout the month of December, so any issues that arose could be resolved with minimal downtime.

Lowe’s also needed to reconfigure some of the interior features in the new facility to accommodate its mix of conveyable and non-conveyable goods. Accordingly, racking that was throughout the DC was moved from the south side of the building to the north side, where the palletized conveyables are now stored.

This is where the 10 depalletizing units reside, and link to the conveyor system.

A put-to-light system that was not suitable for Lowe’s operations was decommissioned and sold.

Upgrading the overhead lighting from T5 to motion-activated LED was a big investment, with a three-year ROI. The change brings environmental benefits, lower energy bills and makes the workspace brighter and therefore more pleasant and safer.

As part of the deal, Lowe’s negotiated to keep the material handling fleet left behind by the previous owner. 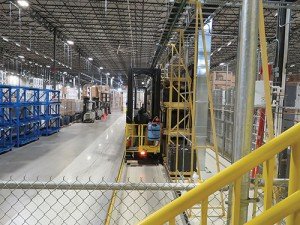 One of the first tasks to be completed was increasing the size of the battery corral.

One of the first orders of business was to build a new battery-charging corral, big enough to handle the needs of the whole fleet. And while the single station means further travel for some of the equipment to get a charged battery, the new building configuration means that much of the equipment is now being put to better use.

The reach trucks in the old DC would run from the receiving door straight to put-away. Now, to accommodate the size of the building they are using the faster multiple-pallet walkies for put-away.

“Some of the equipment is going to improve utilization,” said Paradis. “It’s going to minimize repairs because the reach trucks are staying in the racks and not travelling very far. In this environment we’re using the equipment for the right reasons.”

One benefit of staying close to the old building was it meant the staff all moved over. At the moment there are 330-plus hourly employees, with another 100 planned, in additional to management, coordinators and coaches.

Training was a big challenge, however. Many of the staff have been with Lowe’s for a long time and have years of experience on the Crown equipment. But, says Paradis, “a walkie might just be a walkie, but if it’s a Crown walkie, before moving to a Raymond walkie you have to be retrained.”

They retrained all their experienced operators so they’d have the versatility to move among the various types of equipment. And the training is continuous.

“If someone is certified on the walkie, we’ll be training them on a counterbalanced or reach truck so we’re expanding the flexibility that we have to move people throughout the operation,” Paradis added.

With the operation running 24-7 with four 10-hour shifts Monday to Thursday, and 12-hour shifts Friday through Sunday, that flexibilty comes in handy. It supports the weekly business cycle at the retailer’s 40 Canadian stores, which are all west of Quebec.

“The majority of our business is weekend,” Paradis said. “We want staff to be on call so we can react to snowstorms, critical demand from a store or keep current with outstanding demand and during the week.”

Inventory turns about every two weeks. That’s throughput of 100 inbound trailers a day, and 3.5 trailers per week per store outbound, or about 30 per day.

All kidding aside, it was Stuart’s replenishment team who had responsibility to ensure the move to the new building went seamlessly for the stores and none of those sales were lost. With the DC cutover taking place on December 1, it might have seemed a risk in the lead up to Christmas.

But for Lowe’s, “Christmas”—in the sense of the busiest time of year—is actually Spring, or patio season. And the first patio trailer was due to arrive in early December. So to avoid receiving the patio shipments at the old DC and then moving them to the new one, and potentially creating a backlog, the December 1 start date was set.

“Ideally we would have done it later,” Stuart said. “But we wanted to get out of the old building to get rid of that cost, and this was really the last kick at the can in terms of the drop-dead date to do the conversion. We spent a lot of time training, and the staff had six or seven days [in the new DC] before patio started arriving.”

For the stores, the changeover was practically invisible. Stuart elaborated: “They didn’t get deliveries for a week, but that gave them the chance to get ready for Christmas. And then we were shipping. The first load went out December 1 to our Waterloo store and we’ve been shipping and receiving ever since.”

The whole conversion process was managed by two teams. Paradis had a project manager, a project lead, and one engineer. In the six months leading up to the move the lead negotiated contracts and managed the spend commitment, while the engineer worked with all the vendors around racking configuration, signage, teardown, and all the details around the flow from the old building to the new.

Stuart dedicated a replenishment director and a supply chain manager from October, looking at how to shut off replenishment, and communicating with vendors, managers and stores.

One of the biggest challenges in the cutover was making sure the new IT would work. The entire building had to be re-cabled, with new servers, new landlines and WiFi. Thanks to help from US staff, who have experience integrating the Lowe’s WMS with the automation, the systems were up and running, and ready for testing a couple weeks before the deadline.

“Kudos to our IT team,” said Paradis. “We gave them a very aggressive timeline and they came through with flying colours.”

The move went remarkably smoothly, with only a few surmountable hiccups.

While loading in the merchandise they discovered a few missing locations, or locations that couldn’t accommodate the product assigned to them. A problem resolution area was set up with a team that made the changes to the WMS on the fly. 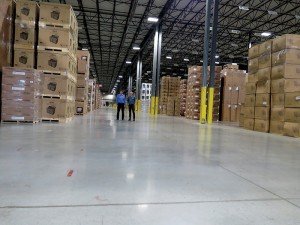 It’s surreal to be in a building this size, Paradis recounted.

As Paradis recounted, “There’s always a set-up challenge, but it is minimal in the grand scheme of things when you do a building of this size.”

There was also a learning curve to be overcome. “Even though some of [our staff] have been with us for eight years, you have to remember that it is still new to them,” Paradis said. “The locations are different, the layout is different; it is a new building. Initially we took more of a productivity hit than we had expected, so don’t underestimate the “noise” that a new facility will make.”

As far as best practices recommended by the Lowe’s management team, the biggest one for both Stuart and Paradis is managing the people equation. In this case it meant frequent updates for all staff in the form of meetings and visits to the new building. They even hosted a family open house—complete with a bouncy castle for the kids—that let everyone see the scope of the new building. And during the entire conversion period the company provided coffee and donuts and lunches.

Stuart said it’s also a matter of instilling proper procedures right off the bat. “You need to get people to recognize the disciplines and build the good habits from day one, as opposed to saying: ‘Well, once we get settled, then we’ll start putting the disciplines in place.’ We needed to do that from day one.”

According to Paradis, this discipline meant that a lot of potential roadblocks didn’t happen.

“I’m proud of what our team did. Gregor and I can’t do this ourselves; we do need a team of leaders and the team of people on the floor that move the freight. Everybody’s on board and I think the biggest piece was that engagement, that communication. People are excited about the move, they know what their responsibilities are and we’re rolling in the same direction.”