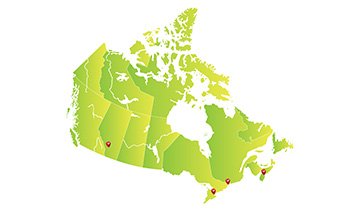 When Advanced Drainage Systems (ADS) Inc wanted to expand into Eastern Canada, Jason Moore, general manager of Canada and distribution yards had a simple method for picking a location.

“Moncton is truly the hub of the Maritimes, just the proximity and the central location. When I was picking the location, I just drew a circle of a hundred mile radius, and got a sense of what’s there in terms of populations and the cities. That is what sold me.”

While the Hilliard, Ohio-based producer of pipe products had an easy time settling on Petitcodiac, New Brunswick, just outside of Moncton, for its new distribution yard, other organizations may find the process more complicated. Balancing building costs with geographic advantages, examining market size, evaluating support services and amenities, and understanding the labour pool are just some of the considerations that play a role in the final determination.

One other factor that often comes into play during the decision making process is input—and influence—from cities, regions, and municipalities. Due to the solid growth demonstrated by the warehousing, distribution and 3PL industries, many areas are actively promoting themselves as supply-chain friendly destinations.

What Milton offers is location. The town is situated on Highway 401, approximately 50km west of Toronto (population 5.5 million if counting the entire Greater Toronto Area) and about 50km east of Waterloo Region (pop. 553,000). Including the entire Greater Golden Horseshoe, over 8.4 million people (using 2006 Census data) are within a relatively short drive.

Andrew Siltala, senior manager of economic development for the Town of Milton, says geography is a draw.

“It’s a very easy task. We’re not doing anything to position ourselves as a [warehousing and logistics hub]. We are that by the nature of our location. What we are is a business-friendly environment that does a very good job of processing permits in a timely manner and meeting business needs.”

In order to ensure there are places new businesses can settle, the town is planning for future developments, working with developers on finding plots of land 100 acres or larger.

Milton’s success is primarily built on trucking. CN and CP lines cross in Milton but the businesses don’t really use rail. With so many trucks moving through, not to mention so many regional commuters, highway congestion must be considered a potential problem.

“Traffic is a fact of life. I guess if there is a challenge, it’s working with our partners to make sure the required infrastructure, the larger highways—Highway 401, Highway 407—are widened and are able to support the traffic.”

In many ways, if Milton is positioned at one end of a scale (single mode, no marketing), Halifax, Nova Scotia is diametrically opposed. The Halifax Gateway Council brings together transportation and logistics stakeholders to speak with one voice about the area, to set common priorities, and to market Halifax’s role as a logistics hub says Nancy Phillips, executive director of the council.

Halifax positions itself as a multimodal hub. “You can bring your product in, or export your product through an international seaport. You can move it via Class 1 rail system (CN). We have the largest airport in Atlantic Canada,” Phillips says.

The Halifax Gateway Council makes an effort to point out the region’s other advantages including a balanced import-export ratio and land set aside in the Burnside Industrial Park for supply chain businesses.

“Our biggest weakness, and it’s not something we’ll ever be able to fix,” Phillips says, “is that for some companies we are further from market. When we’re out there targeting and working with companies, we’re very up-front: if you’re a major online retailer, for instance, and you offer 24-hour customer turnaround times, we may not be the best choice.”

With the exception of having its own seaport, in many ways Calgary’s pitch has a similar feeling to Halifax’s. City officials actively promote Calgary as a multi-modal hub with strong rail, road and air access.

“The Canamex Highway and the TransCanada Highway cross at the City of Calgary. We also have access to a high-load corridor to the west of the city that carries goods out directly into the Fort McMurray market area. We have two major rail intermodal yards,” says Tom Dixon, business development manager for real estate and logistics at Greater Calgary Economic Development.

He adds that expansion of the Calgary International Airport (including a new cargo facility and an extended runway), the construction of the Calgary Ring Road, which allows traffic to bypass the city, and the development of warehousing space in the along the Ring Road are also beneficial for logistics companies.

While landlocked, the city is accessible to Prince Rupert and Port Metro Vancouver. There are pre-built warehouses for rent, as well as numerous opportunities for build-to-suit properties.

People who want supply chain training have opportunities in the area, at the Southern Alberta Institute of Technology (SAIT) Polytechnic Institute, Mount Royal University and the University of Calgary.

Dixon says the Prairie city can’t compete with the greater populations found in Ontario, and in terms of its western neighbours, they also have a few benefits Calgary can’t quite match.

“The biggest disadvantage is our geographic location relative to the oilsands.” In that regard, Edmonton and Leduc have the advantage, he says.

“Over the last several years city officials have made a conscious decision to focus on the supply chain,” says Bob Peters, senior development officer for the City of Cornwall.

The city has a philosophy that drives it to “build now and secure investments” so it places no development charges on industrial properties and the cost of the land (which the city owns, develops and sells) is $30,000 an acre: “as low as we’re legally allowed to price it.”

Local supply chain leaders have worked with the Cornwall campus of St Lawrence College to establish supply chain training programs, including one to train manual labourers how to work in warehouses and one for college and university graduates.

One other enticement Peters pitches to prospective businesses is the low cost of electricity. Cornwall draws power from Hydro-Quebec and can offer it at 10 percent less than in other Ontario locations.

The city is accessed by an interchange off Highway 401. It also has a bridge to the US with a replacement under construction. A CN mainline bisects the city.

Ideally, Cornwall could take advantage of its location on the St Lawrence Seaway, but the shipping season is a bit short, the waters run very fast, there is no rail line to the water and the infrastructure along the river hasn’t been kept up over the years. Peters says none of these issues is completely insurmountable.

“We’re going to keep an eye to what’s possible in the future.”