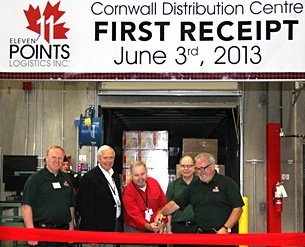 “It was less than two years ago that I stood on this site which was then just a field and trees so it’s very exciting to see how much we have achieved in such a short period of time,” said Tom Shaw, vice-president of distribution for Target Canada.

The 1.4 million square-foot DC has over 200 dock level doors and sits on 169 acres of land. Racking in the facility measures over nine metres (30ft) high. The building is large enough that one could lay the CN Tower inside the building and not touch the east or west walls.

“Eleven Points Logistics has assembled a great team here in Cornwall, and we are excited to help Target launch its brand in Canada,” said Ewen McIlraith, vice-president of Eleven Points.