August 8, 2019
by Inside Logistics Online Staff

August 8, 2019
by Inside Logistics Online Staff 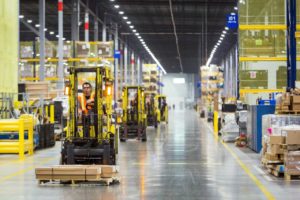 The 1.1 million-square-foot plant is triple the size of the facility that it is replacing. (Photo by Jeffrey Sauger for General Motors)

The 1.1 million-square-foot plant, located on 141 acres on Davison Road, is triple the size of the facility in Burton that it is replacing. The increased capacity allows for greater efficiency and output as employees unitize and package as many as 120 million service parts a year.

“We have had tremendous support from the City of Burton, including Mayor Paula Zelenko and the city council, UAW Local 651, the project management team at NorthPoint Development and the Michigan Economic Development Corp. to take this facility from concept to reality,” said Barry Engle, GM executive vice-president and president, the Americas. “We are very grateful for this opportunity to expand, grow and contribute to the Burton community.”

GM and its general contractor NorthPoint Development broke ground on the new site in June 2018, and GM shipped its first outbound delivery in June 2019.