He said, she said: 2013 Annual Survey of the Canadian Supply Chain Professional 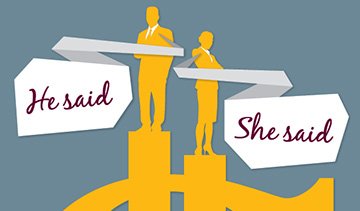 Pay equity in the supply chain: Perception versus reality.

The 2013 Annual Survey of the Supply Chain Professional compared how men and women are compensated. Read on to learn the shocking truth.

As in past years, the 2013 Annual Survey of the Canadian Supply Chain Professional asked respondents about their compensation, their working conditions, their industries and the companies that employ them, and this year 2,177 people across the country responded. The survey was conducted on behalf of the industry’s three leading magazines—MM&D, PurchasingB2B, and CT&L—and SCMA, formerly PMAC. The statistics are considered accurate +/-2.1 percent, 19 times out of 20.

The majority of male respondents—79 percent to be exact—believe their female counterparts are receiving equal pay for equal work. By contrast, 55 percent of female respondents say women aren’t paid the same.

This means women earn only 88.6 percent of the overall average industry salary and 82.4 percent of what their male co-workers get.

Attend a free webinar to learn more about the survey results.

It doesn’t even matter how long a woman has been in the supply chain field. In every stage of their careers, women make less than men. For those just getting their start in the industry—employed five years or less—the mean salary for women is $59,849, and for men it’s $65,479, a difference of $5,630. This is a significant step back from gains made by this cohort in 2012 when the salary difference in this group was only $437 ($56,127 for men and $55,690 for women). As to why this discrepancy still exists, and why many people don’t think it’s a reality, many respondents insist their company culture and working environment pays employees based on factors other than gender (skill level and experience, for example), promotes employment equity, and has women in senior positions (making the company female-friendly) but as the figures indicates, just because people believe things, it doesn’t make them true.

This year Manitoba and Saskatchewan saw the biggest increases in average salary. Supply chain professionals working in those two provinces (grouped together for the purpose of the survey) saw the mean increase by 8.4 percent, from $75,190 in 2012 to $85,519 in 2013.

Those working in Atlantic Canada experienced a decrease, as the average dropped 2.1 percent from $75,781 last year to $74,220 this year. Manufacturing supply chain employees saw a 5.6 percent increase for a total of $82,222. Supply chain professionals in healthcare showed the biggest average increase: seven percent, which sent their mean salary up from $77,750 in 2012 to $82,222 in 2013.

Natural resources supply chain professionals saw a 3.9 percent bump, which put them mid-pack in terms of average increases, but they’re still earning the most—they’re the only ones to pull in six figures. In 2013 their mean salary is $105,979, up from $101,967 the previous year.

2013 has been a good year to be working as a consultant. Respondents who used that title saw their mean salaries skyrocket into the stratosphere. They jumped 24.5 percent from $85,596 to $106,601. While they didn’t jump as high, supervisors and operations/tactical staff also saw averages increase. Supervisors averaged 9.4 percent more in 2013 than in 2012, bringing their mean salaries up to $83,025, while operations saw 9.2 percent more, getting them $68,859 in 2013.

The size of the company a supply chain professional works for makes a big difference in compensation. For people employed at organizations with less than $100 million in revenue, the mean salary is $76,275. Those working in companies with over $100 million in revenue earn $98,136 in 2013. That works out to a 1.2 percent increase for people at companies with lower revenue figures and a 3.4 percent increase for their colleagues in the higher revenue category. Role of the supply chain

According to the majority of respondents, their organizations appreciate the value their supply chain employees bring. Seventy-seven percent (a figure unchanged from 2012) either agree or strongly agree with the statement, “My company has come to realize our business could not function without supply chain management professionals.”

But recognition doesn’t necessarily translate into influence at the highest levels. While 71 percent either agreed or strongly agreed that, “During the last year the supply chain role in my organization has increased in influence with senior management,” that didn’t mean respondents had access to the C-suite.

Nature of the job

Every year, supply chain professionals say the most important issue they face is cost control, and while that hasn’t changed in 2013, the number of people who cite that as their primary concern did. In 2012, 32 percent picked cost control as the top supply chain issue. This year, only 19 percent said the same thing. Reorganization came second with 14 percent naming that as the key issue. Last year, eight percent identified reorganization. Next on this year’s list were supplier relationship management and skills shortage (each garnering nine percent of respondents), and risk management, forecasting, and capacity shortages, which were all listed as the top concern by six percent of those who answered. At the very bottom of the list, with one percent each, were corporate social responsibility and environmental responsibility and sustainability.

When asked what issue will top their list of concerns over the course of the next year, once again, respondents listed cost control, but as with the previous question, the number who gave that response declined from 2012. This year 23 percent of respondents put cost control at the top. Last year it was 32 percent.

And as with the previous question, reorganization jumped to number two, with 13 percent saying that was going to be top of mind this year. That’s in comparison to 2012, when eight percent listed it first.

Along with asking about the big picture of the job, the survey asked respondents to detail what has changed on a more personal basis, and while there has been change, it has been consistent change.

There was definitely more money: 35 percent of people received a raise in 2013 and 26 percent got a bonus.

One quarter reported no change at all in their employment situation, while 23 percent have the same job and salary but have been given extra responsibilities due to reduced staffing. Twelve percent were promoted. Nine percent moved either moved to a new organization or changed jobs within the same organization. Three percent are now job sharing, another three percent are in a new role because their old position was eliminated, two percent were laid off, and less than one percent are out of work due to company closures. Although it’s said money can’t buy happiness, supply chain professionals with higher wages and compensation levels are happier. Those who are either very or somewhat satisfied with their salaries have a mean salary figure of $95,156. In comparison, those who classify themselves as not very or not at all satisfied earn an average salary of $69,123. Last year the satisfied people earned $92,138 and the unsatisfied ones got $66,810.

In total, 72 percent (a figure identical to last year’s) said they were either somewhat or very satisfied with their salaries, which is important given that 98 percent of people said having a competitive salary is important to how satisfied they are with their jobs.

The survey also asked about other factors that can contribute to contentedness and happiness with a job including work/life balance (which 97 percent of people said was important but only 74 percent said they were satisfied with, a significant drop from 81 percent in 2012), the benefits package (83 percent were satisfied) and pension and RRSP contributions (with 80 percent satisfied).

Some of the biggest gaps between how important an aspect of the job is and how satisfied respondents are with that aspect of the job come in the areas of performance recognition (94 percent say it’s important, but only 68 percent report being satisfied with how their companies recognize their performance), opportunities for advancement (62 percent saying they’re satisfied with the opportunities, versus 88 percent who say it’s important to their overall job satisfaction) and influence on the job with 79 percent indicating they are satisfied with their amount of influence and 96 percent saying their ability to influence is important.

When asked how they see their future, 36 percent say they’ll be working in the same job over the next two years. One third (33 percent) are expecting to be promoted and 21 percent think they’ll be employed elsewhere, but still working in the supply chain. Two percent are planning to become self-employed or shift into consulting, three percent envision a complete career change and five percent expect to retire.

For those who think they’ll wind up working for a different organization, 55 percent feel there are no opportunities for advancement in their current organizations, 49 percent think they’ll earn more, and 46 percent just need a change or a new opportunity. Other reasons offered include lack of management appreciation for the supply chain (34 percent), poor relationship with supervisors, desire to relocate, and expectations of downsizing.

People skills—interpersonal relationships and management—were identified by 30 percent of supply chain professionals as the most important. Strategic leadership was listed second by 14 percent of respondents. Decision-making was a close third, at 12 percent. The most significant change from 2012 was the decline in importance of negotiation. It dropped from 12 percent last year to nine percent this year.

For the most part, there was a great deal of consistency between this year’s results and the results from 2012, especially if you exclude the salary figures and focus on areas like the need to upgrade qualifications or add professional designations. People are still turning to professional associations and trade publications to keep up with developments in their fields. There are still gaps between what people are paid and how their performance is recognized and what they believe they’re worth, but 87 percent of respondents say they are satisfied with the overall aspects of their jobs, the same as in 2012. Top supply chain issued faced in the past year

For the first time, the Annual Survey of the Canadian Supply Chain Professional asked respondents who indicated they have duties and responsibilities in the warehouse about the nature of their jobs.

Specifically the question read: “The work being done in warehouses is changing due to new technology, faster turnaround times and cost reduction pressures (among other factors). Not including different responsibilities due to a promotion, has your job changed in the past three years?”

Out of a total of 1,281 people (59 percent of all survey respondents), who said their job function involves warehouse activities including logistics, warehousing or inventory and materials control, 58 percent said their jobs had evolved while 42 percent indicated no change.