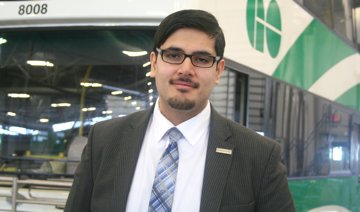 FROM THE MM&D MARCH/APRIL 2012 PRINT EDITION:

Farooqi had just graduated with a marketing and finance degree, and had begun a new academic program to study for his Master’s degree in public-private partnerships when he took an internship with Metrolinx in 2009.

Given his background, Farooqi’s supervisor at the Ontario government transit agency posed a question to him. He asked if a public-private partnership would allow transit authorities to purchase bus parts more cheaply and improve the efficiency of the parts supply chain.

Farooqi’s reply and his efforts turning a theoretical answer into the reality known as the Transit Inventory Management System (TIMS) have earned him the 2012 Supply Chain and Logistics Association Canada’s President’s Award, which was presented at Supply Chain Canada’s 45th Annual Conference and Trade Show.

“I started looking at the question. I started researching it and seeing how it was being done in other sectors, and I saw some things in the airline industry.

“I took that information and began building a business case. I advanced the project through each stage. They called me project champion or project leader.

“I developed a survey. I analyzed 10,000 SKUs. I looked at all the contracts. I went out to Chicago and Rochester and visited them—out of my own curiosity. I talked to their fleet managers and purchasing people. I just worked through the various stages of the contract to make sure it would be delivered correctly.”

As a reward for his efforts, Farooqi was hired on permanently as program analyst. Recently, he added the title of contract administrator to his résumé.

The data supplied by those agencies offered Farooqi some surprises.

“We looked at 10,000 different SKUs. We looked at the prices of parts. On average, there was a 36.2 percent price variance in parts bought from the same supplier network. We discovered that for a fleet that’s 70 percent the same—the same vehicle and the same vehicle configurations—less than seven percent of the parts were matching.”

Metrolinx then took a number of steps. It developed a common parts naming scheme, conducted a survey about potential cost-savings, and performed a cost-benefit analysis examining three business models: doing business as usual, handing over materials management to an outside party, and turning over both materials management and consignment to an outside party.

According to Farooqi, the third option promised returns on investment in a magnitude of 40 to 50 percent with no up-front capital from Metrolinx.

An RFP was created to search for third parties who would be willing to take over the management of the bus parts procurement and supply chain.

Neopart LLC won the contract to source parts, warehouse them in a centralized DC and distribute them to the transit agencies.

The project has just started rolling out. The first transit agency to go live was Oakville Transit in February. Hamilton was the second, London the third. After that come GO and Grand River. The others follow in May this year.

“In Oakville, after they did their data cleansing and data analysis, they were looking at savings in the range of over 10 percent,” said Farooqi.

One key decision in ensuring an on-time roll out and promised cost savings was deciding that a real-time IT system wasn’t needed.

“We started talking to other jurisdictions, the biggest cost and hindrance was integration into an IT system. So we asked what do we really need to give? We boiled it down to a static, end-of-day batch transfer through an FTP server. At the end of the day, they’re told ‘these are all the parts that were issued off the counter and these are all the POs we’ll need for the next day.’ Those get FTP’ed back and forth. As a result you don’t need a real time interface.

“Neopart gets a material master of all of the transit systems with the minimums and maximums, so they track that. When the FTP comes in they import it into Crystal Reports and they just plug it in and say these parts are getting close to minimums so we should order more stock and these have hit minimums so let’s issue these, put them on a pallet and get them out tomorrow morning.”

“We used to get 11,000 deliveries a year. Now it’s 3,000. Instead of eight or nine shipments every quarter from one supplier, we might just have two a year.”