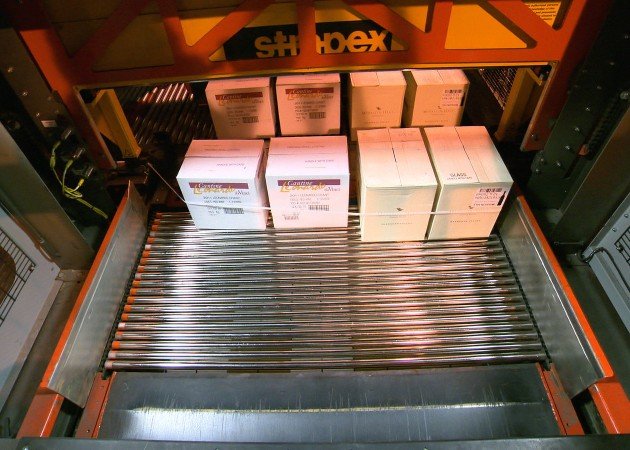 LCBO was one of more than 60 entrants, beating out high-profile finalists including Hewlett-Packard, Lennox Industries, and the US Marine Corps (Concurrent).

“We are very proud of the LCBO team. The automated palletization technology is not only productive, efficient and ergonomic, but it has never been done anywhere in the world – it is completely proprietary to the LCBO. The Durham warehouse is 30-years old, but remains a best-in-class distribution facility with some of the most advanced logistics technologies, many of which originated within the LCBO itself,” said George Soleas, LCBO executive vice-president.

The automated palletization technology invented by LCBO staff uses an algorithm for a tetris-like technique that stacks varying case sizes into more stable pallets for delivery across Ontario.

Since the introduction of these Automated Pallet Lanes (APL), efficiency and productivity has soared and there has been a marked reduction in workplace injuries and product breakage. The more compact and secure pallets have resulted in a significant decrease in the use of shrink wrap, reducing freight costs and LCBO’s environmental footprint.

QUICK FACTS
· The automated system palletizes five-times as many cases as manually and accounts for 77 per cent of LCBO case volume
· The Durham warehouse is 500,000 sq. ft. and processes more than 50 million cases a year
· The technology has won the 2014 LCBO President’s Award for Innovation in Logistics, the 2015 Retail Council of Canada Excellence Award, and the 2015 CSCMP Supply Chain Innovation Award (international)