Expansion plans already in the works 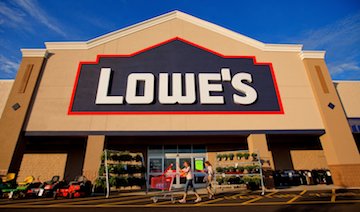 MILTON, Ontario—Milton, Ontario calls itself one of North America’s fastest growing towns, and based on the number of new warehouses and distribution centres that keep opening within the town limits, it’s certainly becoming a fast-growing distribution hub. Among the latest companies to open new warehousing operations in the town, which has already seen retailers, including Target, and 3PLs such as Portside create facilities in Milton, is Lowe’s Companies Canada ULC, the Canadian division of Mooresville, North Carolina-based Lowe’s Companies Inc.

Actually, the company already has a presence in the community, so expanding its operations there was an easy decision, according to Mario Paradis, director of distribution for Lowe’s Canada.

“We have been servicing our Canadian stores from our current distribution centre in Milton. Over the last two years, we’ve

had to go to outside storage for six months of the year to store excess inventory during our peak season. As we continue to expand our store count, it was evident that we needed a bigger facility. Milton was the obvious choice as we have been part of this community since we came to Canada in 2007, and it was important to us to expand as close to our current facility as possible to prevent any disruption to our current experienced staff.”

The hardware retailer is currently putting the finishing touches on the first stage of its latest DC, which is set to begin operating in mid-February. Even though the building hasn’t officially opened yet, Paradis, says the company has already planned for the facility’s expansion.

The DC, which is situated just north of highway 401, has 98 dock doors, and will add an additional 18 during the second construction phase. According to Paradis, approximately 100 trailers per day will be handled at the facility.

When it opens, it will initially employ approximately 250 full time employees. That number is expected to grow to 300 once the expansion is completed. Additionally Lowe’s expects to hire between 50 and 75 additional season employees each spring. Lowe’s will operate the facility by itself. Until December 2010, the company used a 3PL partner to manage its warehouse operations, but at that point it moved the management and operations responsibility in-house. The retail distribution centre will carry roughly 17,000 SKUs, with nearly half (45 percent) being cross-docked. Lowe’s employees will be responsible for manually handling all of the company’s stock, says Paradis, at least for a little while.

“We will not have any automation when we move into this facility but we are looking at the feasibility of including automated conveyors in the near future.”