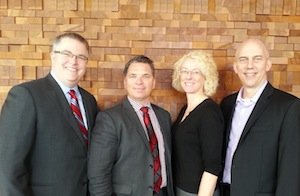 From the MM&D January-February 2015 print edition

MM&D magazine was a media sponsor of the 2015 Cargo Logistics Canada conference and show in Vancouver, January 28 and 29.

At the show we presented the results of the 2014 DC Cost Benchmarking study, MM&D’s original research conducted in the summer of 2014, and sponsored by BDO.

This time around we were joined on stage by three supply chain practitioners with a wealth of experience in controlling and managing DC costs. They were: Andrew Kirkpatrick, director of sales for NFI Industries, Ian MacKenzie, head of logistics and distribution at Kit and Ace, and John McKenna, president of McKenna Logistics Centres.

McKenna led off the panel discussion, using a clear plastic storage box and lots of tennis balls to illustrate his narrative on how a DC can evolve. With the balls just loose in the box, it was a basic warehouse.

He demonstrated how easily slow-moving product can make you run out of space, and then some of the actions commonly taken to make operations more efficient. He made the point, however, that although making your warehouse operate more smoothly, many of these improvements will make your cost per unit stored rise, potentially bringing unwanted scrutiny from the bean counters.

He cited a common example from the world of e-commerce where the number of units per order declines.

“Well, now we need more staging area because we’re not shipping directly out of the truck anymore. So I get less product in the warehouse. Now I have to put carton labels on the pallets. Not just a full pallet label, it’s a carton label. And we have to wait for the LTL carrier to come and pick it up. We’re not just direct-loading it. So our costs go up again.”

Next up, MacKenzie talked about the importance of labour management. A successful DC manager will spend a fair bit of time walking around and observing what’s going on, enquiring about what’s happening and why, recording data and generally being present for the staff. He recounted numerous efficiency gains that were achieved because this informal process revealed poor processes.

He also discussed the role of technology in the DC, and advocated strongly for the simple, relatively inexpensive solutions that are user-friendly and easy to implement—smartphones, for example.

“We have the most technologically savvy workforce in the history of the planet and when they get to work we ask them to turn these off and put them away and ask them to do an incredibly mundane, boring, go-pick-up-a-box-and-put-it-down, job…They live and breathe having one of these devices in their hand. They can do things faster with it than I can, yet we ask them to put them down,” he said.

He cited the example of a 50-person company in California, that instead of buying a capital-intensive WMS, had an app developed and gave all the staff iPhones. The company’s complete supply chain is run with the phones.

“So imagine when you hire a new employee and hand them an iPhone, do you think you need to give them very much training?” he added.

The final panelist, Andrew Kirkpatrick, spoke about the importance of building and maintaining a good relationship between third-party warehousing suppliers and buyers.

“More often than not, we see in our environment that incorrect assumptions and poor planning ultimately lead to higher costs. From a 3PL’s perspective the dialogue should begin long before the customer awards you the business,” he said.

You have to ask a lot of questions, and don’t assume the customer knows the right answers: “We joke, in the 3PL environment, that there’s two types of customers: the ones that don’t know enough about their business or the ones that think they do, but they’re just not sharing the information with you.”

A fundamental that is surprisingly overlooked, Kirkpatrick added, is that all business should have contracts in place.

“All business being managed, whether you’re doing it yourself or you’re outsourcing, should have contracts in place. And I know it’s simple to say, but it amazes me when we talk to clients and we hear about business that’s happening and there is no real commercial agreement in place.”

Finally, he said, you have to have the operating assumptions documented. It’s a challenge to go back to a client saying, “You know what? The business is different than what we expected. It’s changing and we need to sit down at the table and look at it.”

“That’s where real partnerships grow,” he continued. “I’m a firm believer that shippers shouldn’t be outsourcing their supply chain to a third party to pass off their uncertainties or their customer or the retailer’s demands, it should be a partnership.”

Awards of Excellence
The Cargo Logistics Canada show was also host to the 1st Annual CLC Awards of Excellence. The awards offered an opportunity for the industry’s clients, vendors and supporters to recognize and celebrate BC’s best and brightest in logistics and distribution.

Awards were presented in 15 categories including Safety, Sustainability, Supply Chain Woman of the Year and number of Best of Industry Suppliers. Voting for the majority of the awards took place online, while the Safety, Sustainability and Supply Chain Woman of the Year Awards were done by nomination. In addition, the awards’ managing partner, the Canadian Material Handling & Distribution Society (CMHDS) recognized their outstanding member of the year.

Safety Driven was given Honourable Mention for their video on “Ground Guiding and Spotting”, a video overview of the essential things to know when guiding a vehicle that is backing up.

CLC Sustainability Award – Gate Gourmet
Gate Gourmet was recognized for their program of source separation, treating organics and diverting them to turf farms, using organic digesters for in-house waste treatment and conversion of waste to an alternate fuel.

CLC Supply Chain Woman of the Year – Angela Talic (ILWU)
Angela was recognized for her role in producing the video “Women on the Waterfront”. She accepted the award on behalf of all women who work on the waterfront.

CMHDS 2014 Member of the Year – Hi-Cube Storage
Hi-Cube Storage took the award for their support of the CMHDS in helping raise $5,000 for Canuck Place Children’s Hospice during the society’s 2014 Charity Golf Tournament.

Online Voting Awards
From November 2014 to January 2015 clients, followers and supporters logged on to vote for their preferred industry providers. Here are the winners.