Dairy and produce storage facility to replace existing one 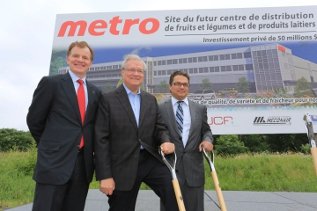 The company, which operates Metro, Metro Plus, Super C and Food Basic stores, broke ground on a new $50 million produce and dairy distribution centre in Laval.

“Strategically located near the main highways 25 and 440, the new warehouse will also allow us to improve the efficiency of our distribution chain and to consolidate approximately 250 quality jobs in the Greater Montreal Region,” said Eric La Flèche, president and CEO of Metro Inc.

The project will have green aspects to it, including a white roof, to reflect heat, and LED outdoor lighting. Indoor lighting will be triggered by sensors, and the plans are to use a CO2 coolant-based refrigeration system. Additionally the company intends to take measures to help preserve some of the biodiversity of the facility site, including building a hibernacula for garter snakes, conservation of damp environments and transplanting of trees.