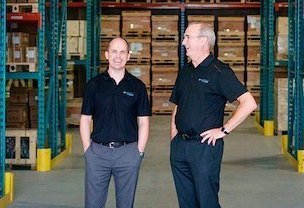 The 6,000 square foot office, warehouse and distribution centre is located on Ronn Road in CentrePort North, the Rural Municipality of Rosser lands at the inland port.

Techtop’s products are manufactured in Asia and shipped to Canada for distribution by rail, road and air, which is what makes CentrePort an ideal location for the company. The location at the inland port allows them to be in close proximity to rail, which brings their products in from the Port of Vancouver, the many trucking companies located at CentrePort, and Winnipeg Richardson International Airport, where they can send rush orders by air cargo.

“We looked at spaces in all of the major cities in the prairies, and this location at CentrePort was ideal for our new central Canadian distribution centre,” said Shane Hickey, vice-president, TechTop.

“TechTop motors power all kinds of industrial products that Manitobans use every day – like car washes, fans, pumps and industrial garage doors. Just like our products, we’re here to help keep the wheels of industry turning. We are excited about our investment in Manitoba and we look forward to becoming part of the community here.”

“We are pleased to welcome Techtop as one of the many new companies at Manitoba’s inland port,” said Diane Gray, president & CEO, CentrePort.

“This company will leverage all three modes of transportation to receive and ship their products and was attracted to the site for that exact purpose. With much of the planning and infrastructure complete in CentrePort North, the market is responding. This has easily been the busiest construction season that we’ve ever seen at the inland port.”

“They have leased a great unit in a brand new multi-unit complex. That building is fully leased now and because the demand is so high, we’ve already started construction on a brand new 83,000 square foot building next door. In the near future, we expect Techtopto have a lot of new neighbours moving in.”

“It’s always exciting to see companies who are new to Manitoba moving in to CentrePort North,” said Reeve Frances Smee. “We welcome Techtopto the R.M. of Rosser and wish them much success.”

CentrePort Canada is Manitoba’s 20,000-acre inland port and Foreign Trade Zone. Located in the heart of North America, CentrePort connects to major national and international trade gateways and corridors, and is the only inland port in Canada with direct access to tri-modal transportation – truck, rail and air cargo.