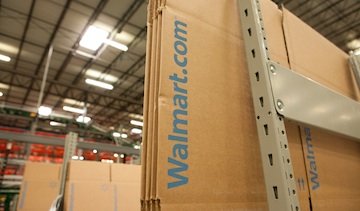 SAN BRUNO, California—Wal-Mart Stores Inc is beefing up its network with the addition of two new facilities.

The DCs are dedicated to online order and e-commerce fulfillment.

Orders began shipping last week from the 800,000sqf DC in Fort Worth, Texas. Once fully staffed, it will employ 275 people on a full-time basis.

The second facility, located in Bethlehem, Pennsylvania, is expected to open in the first quarter of 2014. It will be the larger of the two facilities and is expected to exceed 1,000,000sqf. According to the company, it will ultimately employ more than 350 people full-time.

During peak sales and holiday periods, Walmart says staffing at the two DCs is expected to increase by a total of 600 workers.

The Fort Worth facility will be operated by Brentwood, Tennessee-based OHL, a global supply chain management solutions company. The Bethlehem centre will be fully operated by Walmart.

Walmart says this year it expects sales from its e-commerce business to exceed US$10 billion globally. Outside of the US, most of its e-commerce sales come from Brazil, China, and the UK.

A spokesperson for Walmart Canada told MM&D “Walmart Canada’s online store does not use the same distribution system nor do we carry the same products as Walmart US, so the announcement today out of the US does not impact Walmart Canada e-comm operations.”