Facility in Milton, Ontario, triple the size of old DC More favorable real estate pricing, less traffic congestion, airport access, and moving into an area that’s still serviced by its existing carriers were a few of the reasons the company chose the new location.

Volvo Group took over the new 184,000 square-foot warehouse, at 8640 Escarpment Way, at the end of 2018. At that time, it was a bare-bones warehouse and shop floor. Volvo Group’s Service Market Logistics division added an office area, fitness centre, and about 5,500 sq.-ft. of admin space.

There are now 38 employees working at the PDC, up from 26 at the former location. More than 84,652 Volvo and Mack Trucks, and Volvo Construction Equipment (VCE) parts are stored here for delivery right across Canada. The Volvo Construction Equipment parts are a new addition; previously, those had to be ordered from the U.S., requiring a two- to three-day lead time; now orders can be fulfilled same day.

For Volvo and Mack the turn time for orders has not changed in the new facility, but it offers availability of more part SKUs. Bob Hochwarth, vice-president of service parts logistics, said 95 per cent of Volvo’s parts deliveries globally are delivered within 24 hours. The company operates 54 PDCs around the world, with seven in North America including one in Canada.

More than 800,000 parts orders flow through the PDC each year, and customers as far away as Whitehorse have received next-day parts delivery from the Toronto-area PDC.

“We are really proud of this facility and the work that has been done by the team here in this location,” Hochwarth said. “They moved this facility within a 10-day period. It took a lot of blood, sweat and tears to make that happen.”

“It was quite an effort,” he said. “Within two weeks we labeled all these locations with a scannable barcode for every location, and then we had a box-folding party and put all the totes in there too.” 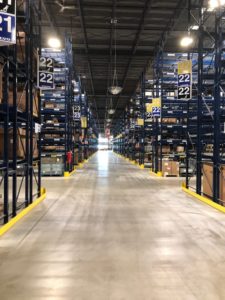 The DC has more than 83,000 pick locations, in racking and bin storage. (Photo: James Menzies)

Volvo Production System (VPS) boards are set up at stations throughout the warehouse, where meetings are held each day to discuss order line fulfillment, inbound receipts, safety, quality, and other metrics.

On the DC floor 30 staff operate in two shifts a day, Monday to Friday, with 15 people per shift.

There are 83,740 pick locations throughout the facility in pallet rack and cantilever rack, and bin-picking configurations. The DC devotes 38,000 locations to the VCE inventory, which is “the reason we moved into the building,” Johnston said.

About 35 forklifts, cherry pickers and order selectors are electric-powered by fast charging stations that can charge up a forklift in 30 minutes. The mobile equipment is RFID-enabled for picking orders.

Outbound shipments are either small parcel, picked up by partners Fedex and Purolator, or LTL. A lot of it is same-day orders or emergency parts for VCE. An occasional full truckload leaves the docks. Carriers serving the facility are given dedicated dock doors, so drivers can easily find the right door.

Johnston said the timing couldn’t be better. Canada is coming off a record-setting year for truck orders, with 34,000 units ordered in 2018. Volvo’s market share increased 31 per cent over the previous year, he added, marking its largest market share increase in its history here.