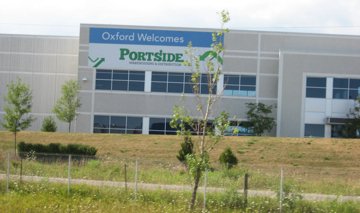 MILTON, Ontario: It’s a busy time at the newly established Ontario operation of Portside Warehousing Inc. The new facility in Milton opened this month, construction is still underway on the building, and goods from the company’s second client in the area are due in this week.

“It’s really a start-up. Portside has been in existence in Vancouver and Richmond BC for a few years, but it only incorporated last August. It has been fairly active in the 3PL warehousing business in Richmond, import and export as well as local distribution and a new client forced us to expand out to Ontario just recently.”

Although he isn’t ready to name that client—the customer is still working out related business arrangements with other companies—he will say it’s a “an import transload-type client. It transloads in Vancouver from ocean containers to 53ft intermodal units and then it goes to Toronto for store distribution.”

In the west, Portside handles pulp exports to China for Miller Western Forest Products Ltd and Canfor Corp. It also does store distribution for retailer Winners Merchants International LP in BC and in northern Alberta (from its facility in Edmonton). The company is an off-shoot of intermodal LTL carrier Western Canada Express.

Although operations are quickly ramping up, Legal says Portside isn’t ready for an official opening.

“The office construction will be a few months yet. We’re operating from a temporary office space in the warehouse, and that’s okay. It’s normal stuff when you get into a building that’s not quite done,” he said.

“The square footage is something we are taking in stages as well. We’ll have 220,000sqft in place by the end of this year. That’s when we’ll really be properly established and the [building] demising will be in place. Right now we’re at 120,000sqft. We have 14 available doors and more to come, and there are some modifications coming to that as well, where we will have an additional four punch-outs at the same time and we’re also doing some work on the property to accommodate more trailer parking, and fencing and security upgrades.”