"It's an order-taking show." News and announcements from the show floor in Chicago

In spite of the elements the show floor was busy on Day 1 of the four-day materials handling extravaganza, and the attendees weren’t just tire-kickers. At several booths we heard the words “it’s an order-taking show”; a refrain that has not been heard at ProMat for years. 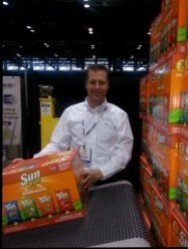 With units operating around the world in Australia, New Zealand, Mexico, Canada and the US, there are few frontiers left to conquer. That number got smaller with the sale of its first loader in Europe, to Michelin in France. It will be up and running by the fall.

ELS has also opened a second production facility and has been hiring new staff. We wish them luck at Wednesday’s award ceremony.

Markham, Ontario’s SailRail Automated Systems is also at the show with its line of ergonomic material handling equipment. President Ian Scarth demonstrated the ErgoKart, which positions and lifts heavy materials. It’s being implemented in every Ford plant in North America. SailRail has been a Ford top ranked supplier for 12 years.

Over at the UniCarriers booth (where we first heard that this is an order-taking show), the mood was buoyant as the company celebrated its first time back at ProMat in about 20 years.

We sat down with four vice-presidents of the newly re-branded company created through the merger of TCM and Nissan Forklift Co to talk about the company’s expansion plans in Canada.

Four dealers have been named: All-Lift in the GTA, AMB Lift Inc in Ottawa, Deval in Montreal and Equipments EMU in Quebec City.

The company is also hiring a national sales manager to operate out of the GTA to serve national accounts.

Watch for more ProMat 2015 coverage in our April print edition.