Packaging innovation from the start of business in 1893 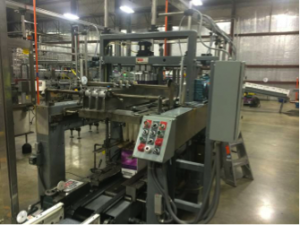 In 1893, when the Fred H. Knapp Company of Westminster, Maryland placed its first gravity labelers on the market by introducing them at the World’s Fair National Convention of Canners in Chicago, the technology of preserving food in metal cans was relatively new. Canned foods were only just beginning to catch on with the general population; they had only been used in military contexts or by explorers at the advent of the technology in the beginning of the 19th century.

Despite the fact that the canning industry was still in its early stages, the Fred H. Knapp Company recognized the industry’s potential for growth and released the Knapp gravity labelers, which mechanized the application of labels to round cans, followed in 1895 by the Knapp Boxer, a hand operated machine designed to pack cans into wooden boxes. For over ten years the Knapp Boxer was the only machine of its kind.

While the Fred H. Knapp Company thrived as it continued to innovate in the field of can labeling and case packing, The National Binding Company of New York City, a manufacturer of compression units for sealing cases as well as paper cutting and dispensing machines, declared bankruptcy in 1920 and its assets were taken over by its largest creditor, the Nashua Paper Company of Nashua, New Hampshire. In 1921, employees of the defunct National Binding Company purchased the compressions business from the Nashua Paper Company for just $10,000 and formed the Standard-Sealing Equipment Company, a closed corporation.

In 1932, the Standard-Sealing Equipment Company merged with the Fred H. Knapp Company, then located in Ridgewood, New Jersey, to form Standard-Knapp. Standard-Knapp became a part of the Emhart Manufacturing company in 1947 and then the Anderson Brothers Manufacturing Company in 1979, before ultimately being purchased by the company’s employees in 1984, much as the Standard-Sealing Equipment Company had been.

Still a private, employee-owned company, Standard-Knapp’s culture is entwined with its history of employee pride and ownership. The company’s employees work together in the occasional lean times to keep the company strong, and, more often, share the rewards of hard work in prosperous times.

The company has remained on the cutting-edge of the packaging industry ever since its first can labeler in 1893, with offerings constantly evolving to meet the demands of the ever-changing industry. With a current desire for packaging utilizing less materials sweeping the industry, Standard-Knapp has designed products to do more with less: tray packers like the 298 Tritium Trayshrink Wrapper that easily packages unsupported cases, thereby eliminating the use of corrugate; packers like the Pic-N-Place that handle at handle materials gently enough to eliminate bottle-to-bottle protection; and machinery designed to handle glass and plastic bottles manufactured with fewer materials just as easily as they did with the bottles’ more sturdy predecessors.

Meanwhile, as new machinery to meet modern packaging demands is provided to Standard-Knapp’s customers daily, the company’s vibrant history is kept alive in the form of machinery – 30, 40, 50 years old or older – still being used by customers.

“Standard-Knapp Equipment has been tried and true, hence the reason we are purchasing one of the 930’s great-grandchildren, the 939S. The 930 has been a very robust and reliable machine that has carried our company to the next level, and while we will be purchasing a newer Standard-Knapp machine, it will not be replacing our current machine but coexisting with it,” said a customer from a winery/distillery who didn’t know exactly how many years their 930 case packer had been in use, but knew that it’s “a lot!”