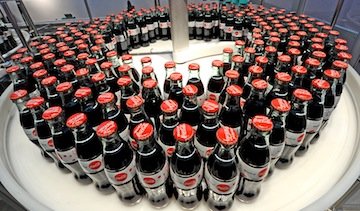 Distribution operations will be shuttered in Chatham (Photo: Coca-Cola)

BRAMPTON and CHATHAM, Ontario—Two separate Coca-Cola Refreshment Company facilities are in the news this week: one because it’s set to close and one because its workers are on strike.

Members of the Canadian Auto Workers (CAW) Local 973 are picketing the company’s Brampton, Ontario facility, which is the company’s largest in Canada. The Brampton plant produces all Coca-Cola products (except Minute Maid), a total of 136 different brands. It also serves as a distribution facility for products shipped across all of Ontario and into parts of Manitoba. The plant employees approximately 700 unionized employees and 100 temporary employees.

Erika Mozes, director of public affairs and communications for Coca-Cola, says talks broke down on June 26 at midnight, “before we could provide them with a comprehensive offer,” adding that “we were never able to talk about wages”.

“The issues circle around precarious work. They’re adamant there will be no full-time employment. We have a mechanism in the agreement to transition temporary workers to full-time. It’s so restrictive and they want to further restrict it so workers won’t have the ability to get full-time job. They want elevated and increased levels of outsourcing for the highway transport group that takes Coca-Cola products to other Coca-Cola workplaces in the province, as well as their holding centres where they stockpile their products. They want elevated in-sourcing for skilled trades as well as our outsourcing for one of our skilled trades departments. And with the increased access to outsourcing, they also want to restrict any layoff transfer rights that we’ve historically had in the Coke system for years, in so far as workers having a right to move with their work. Those are the major sticking points.

“They don’t want to address any of our safety concerns. We were looking to enhance commitments in the collective agreement about the safety of our members and the public, as we have 200 member truck drivers on the road, and they’re not interested in any enhancements about safety.”

He added that the reason the union wants to see safety dealt with in the agreement is so there is recourse if unsafe working conditions occur. “We just want them to recognize the safety rules in the agreement and commit to them. We’re not seeing progress. If it’s in the collective agreement, we have access to the grievance procedure.”

Union members set up pickets at the Brampton facility. In addition, members from the Brampton bargaining unit were at the company’s facilities in Weston, Hamilton, London, Kingston, Ottawa, and Peterborough in what Parson calls “information sessions, talking to the other Coke workers about what’s happening in their workplace. Brampton is the largest facility. It’s about one-fifth of Coca-Cola’s employee population and it generally sets the pattern for the country in terms of working conditions, seniority rights and other things contained in the collective agreement.”

In addition, union members set up at Dominion Warehousing, a 3PL that stores and handles products for Coca-Cola.

“We have ventured into an agreement with the manager at Domion. Because we don’t want to disrupt all of their business there—they work for other companies. So they have agreed Coc-Cola products will only be coming from one gate of three gates, as opposed to the other gates at their main facility—so we don’t disrupt other people’s business.

According to Parson, the CAW was ready to continue negotiations even after the midnight deadline had passed and the union was legally allowed to strike. He puts the existence of the strike at the feet of the company.

“They had built a fence around their compound as early as Wednesday morning. They illegally locked our workers out at about 9:00 PM Wednesday night before the deadline, and refused to pay them for the duration of their shift. As of yesterday, they were still withholding live manual paycheques from temporary employees who had worked the week prior as well.”

Mozes says Coca-Cola has its contingency plans in place and expects to keep distributing products “with limited downtime to customers”.

Coca-Cola has two separate operations in Chatham, Ontario, but come this fall, that number will be cut in half.

“It’s a decision based on the fact that the operations are housed in a building that we lease a portion of—and we own a portion of. When the lease came up, we decided that we are not going to renew the lease and move the distribution to London and Windsor.”

She said the company will work the the union at the Chatham facility to decide which employees will be given offers to move to Windsor or London.

The Chatham DC distributes products into the Southern Ontario market, which is also a market served by both London and Windsor.

“That was also part of the decision for us to not renew the lease, because we knew we’d be able to service the area out of our London and Windsor facilities,” says Mozes.

She expects the facility to close some time in September or October, once negotiations have been completed with the union and talks have been held with the employees.