Two DCs with 1.13-million square feet being developed on spec 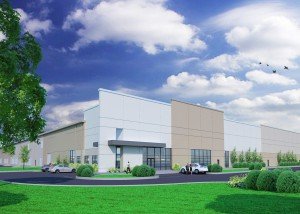 A rendering of the 618 building.

Based on statistical benchmarks, when leased the buildings are projected to produce a minimum of 500 new jobs said TRiSTAR president Michael Towerman.  All told, an estimated 5,500 people currently work at Gateway.

One new structure, Gateway East 618, is being built on a 53-acre site and will span 618,450 square feet with 36’ clear-height ceilings. The cross-docked facility will be 570 feet deep with 68 dock doors and two drive-in doors.

The other tilt-up concrete building, Gateway East 513, will host 513,760 square feet on a 46-acre site and be topped by a 32’ clear height ceiling. Also cross-docked, the building will be 520 feet deep with 58 dock doors and two drive-in doors. Each building is sited to be expandable to more than 1,000,000 square feet.

According to Ed Lampitt, SIOR, CCIM and managing director of the St. Louis office of Cushman Wakefield, the exclusive leasing agent for the Gateway venture, the 618 building is scheduled to be available for occupancy in late summer 2016. with the 513 building tenant-ready later in the fall.

“Gateway Commerce Center is widely acknowledged as one of the leading distribution parks in the Midwest. With 15 bulk buildings containing nearly 11 million square feet under roof, it is a development in which the St. Louis region can take great pride,” said Lampitt. “Our rationale in beginning a pair of buildings simultaneously is to cut a broad swath in the marketplace. We want to offer prospective national tenants a choice – and an excellent match – in their pursuit of highly efficient and expandable bulk space configurations.”

Gateway East 617 and Gateway East 513 will be the third and fourth distribution facilities jointly developed by TRiSTAR and PCCP at Gateway in the past two years.  In 2014, the duo teamed to develop a 673,137-square-foot distribution center occupied in May, 2015 by Florida-based third-party logistics provider Saddle Creek Corp. The $26-million structure was the first speculative industrial building constructed in St. Louis since 2007.

TRiSTAR and PCCP next partnered to recently complete a $36 million, 717,060-square-foot center on a 56-acre site at Gateway. According to Lampitt, while the building is not yet occupied, lease negotiations are on-going.