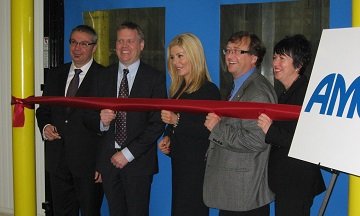 BURLINGTON, Ontario—Although it has been in operation since September, today UPS Canada held the official opening ceremonies for its new pharmaceutical distribution centre, and welcomed anchor tenant AMGEN Canada. The cooler inside the new healthcare DC.

“That space was originally retail. We converted it to healthcare. Our healthcare business—globally and locally—is growing, and because of the requirements around the healthcare space, you have to stay ahead of the curve. You have to build ahead,” said McConnell.

Items that were previously stored in the area were either relocated to the adjacent retail space or re-allocated to facilities in different locations.

The anchor tenant, AMGEN, has used UPS’s services for 15 years, and was a client of the company’s Vaughan facility until transferring its inventory to Burlington.

“We outgrew it. And our requirements, as it relates to security have increased over the past fifteen years, obviously, and this facility, this campus addresses those security requirements,” said Ralph Mueller, director of supply chain, for Mississauga, Ontario-based AMGEN Canada.

“There are oncology drugs. Those are primarily for supportive care. They help patients that are on chemotherapy with their white and red blood cell growth factors. We have nephrology drugs, which would be drugs for patients that are undergoing dialysis. Inflammatory drugs for rheumatoid arthritis as well as psoriasis, and the newest product is one for post-menopausal osteoporosis. About 98 percent of what we distribute in Canada is a cold chain product. There is one drug that we have that isn’t a cold chain, just an ambient,” he said.

AMGEN typically ships 20,000 orders per year, and has approximately 30 SKUs. By moving, the company gained a 40 percent increase in total capacity in its national hub. It also has three forward hospital DCs with the Canadian Pharmaceutical Distribution Network (CPDN), although approximately 90 percent of its products are handled at the main facility. The temperature-controlled part of the warehouse.

According to Mueller, the transition to the new facility went well, even though it was a hard cut-over. In total, the entire move project took nine months.

By moving into the new DC, Mueller said AMGEN not only gained increased security, but it also got a larger delivery window.

“Our air window is open longer. We are closer to the airport here. We ship out of Hamilton [International Airport] and we bypass one sort hub.

“We’re still working on trying to understand the window, but we should get an extra two or two-and-a-half hours, which is important,” he said.

“On occasion, we need to rush. They are urgent shipments. The bigger window we have to ship in, the better.”

AMGEN has a five-year commitment with UPS, but the company won’t be going it alone, as the new space has been designed as a multi-client facility, said McConnell.

“The benefit a company like AMGEN would get is that since it’s multi-client, they’re not paying for the whole burden of the cooler. There is a cost benefit to them.”

In total the Burlington campus consists of 600,000sqf and employs 300 full-time people, plus casual support staff.