August 23, 2021
by Inside Logistics Online Staff

August 23, 2021
by Inside Logistics Online Staff 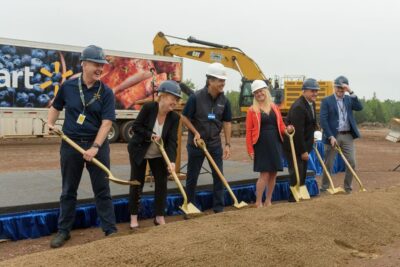 Walmart Canada has broken ground on its first distribution centre in Atlantic Canada – a 223,000-square-foot facility in Moncton, New Brunswick, which is slated to open in fall 2022.

The new DC will provide fresh and frozen groceries to 43 Walmart stores in Atlantic Canada.  The company plans to invest over $56 million in the project, part of a $3.5 billion investment into all aspects of the business over five years.

The distribution centre, which sits on nearly 19 acres of land, will help Walmart cut the number of trucking kilometres it need to distribute food to the Atlantic provinces, the company said in a release.

The DC itself is being built to be environmentally friendly, in keeping with Walmart Canada’s sustainability goals. It will have an Energy Star certified white reflective roof and energy efficient LED lighting with integrated motion sensors and intelligent controls. Waste heat generated from the refrigeration system will be reclaimed and used to supply underfloor heating systems. Finally, the electric material handling equipment will be powered with lithium-ion batteries.

The project will create more than 200 jobs in Moncton and surrounding communities, including more than 100 jobs inside the distribution centre.

“We are thrilled to welcome Walmart to one of Moncton’s Industrial Parks,” said Moncton mayor Dawn Arnold.

“This is another great addition that will bring jobs to the City and contribute to the three-year streak of record-breaking land sales and development for Moncton Industrial Development. Walmart Canada is another client that has demonstrated their confidence in our city as the hub for business expansion in Atlantic Canada.”

The Moncton facility is one of three new Canadian DCs currently under construction. It joins buildings in Surrey, British Columbia and Vaughan, Ontario.

The Vaughan facility will be 550,000 square feet, and when it opens in 2024, it will handle ambient general merchandise and food products.