Amazon calls the facility YOW1 because of its proximity to Ottawa Macdonald-Cartier International Airport (YOW).

November 5, 2019
by Inside Logistics Online Staff

November 5, 2019
by Inside Logistics Online Staff 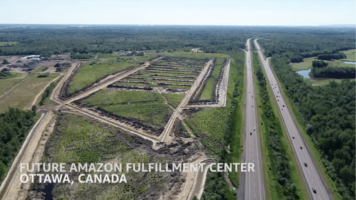 OTTAWA – Amazon has posted a time lapse video showing the rise of its new Ottawa, Ontario, DC from the ground up.

Associates at the facility will pick, pack, and ship large items like household decor, sporting equipment, and gardening tools to be delivered to customers throughout Canada.

This is the first FC in Ottawa. Amazon calls the facility YOW1 because of its proximity to Ottawa Macdonald-Cartier International Airport (YOW).

With a surface area of more than one million square feet, the Amazon distribution centre, which received site plan approval from the City of Ottawa, was to be the largest industrial facility ever built in the area when it was approved.

Broccolini was one of many Canadian companies Amazon partnered with in the construction and launch of the new Canadian FC. It’s the builder, developer, landlord, and property manager of the YOW1 facility.

Approximately 2,000 construction workers were involved from start to finish, with a peak count of over 350 in a single day.

The facility opened in August 2019.