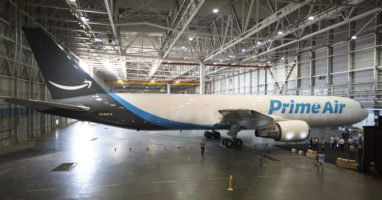 SEATTLE – Today, at the International Paris Air Show, Amazon announced a partnership with GE Capital Aviation Services (GECAS) to lease an additional fifteen Boeing 737-800 cargo aircraft. These fifteen aircraft will be in addition to the five Boeing 737-800’s already leased from GECAS and announced earlier this year. The aircraft will fly in the United States out of the more than 20 air gateways in the Amazon Air network.

“By 2021, Amazon Air will have a portfolio of 70 aircraft flying in our dedicated air network.”

“The capability of the 737-800 freighter will further Amazon’s ability to provide reliable and regional delivery to its customers for years to come.”

Amazon Air’s operation launched in 2016 supporting package delivery to amazon customers. The operation can transport hundreds of thousands of packages per day.

Amazon has launched several initiatives to help it meet its delivery commitments, including its Delivery Service Partner program, Amazon Flex, the company’s mobile application that allows individuals to sign-up, be vetted and begin delivering for Amazon, a dedicated network of over 10,000 trailers to increase trucking capacity and, now, the expanded fleet of cargo aircraft.