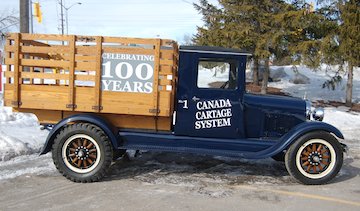 Canada Cartage was established in February 1914 by Robert Leslie. The company’s humble origins began with one horse, one cart and one driver. Today, Canada Cartage is one of Canada’s leading national transportation and logistics companies, with revenues of over half a billion dollars.

“We are very proud to be celebrating our 100th year as a company,” says Jeff Lindsay, president and CEO. “It is a unique accomplishment for a business to reach a centennial milestone. But it’s even rarer that a company stays in business that long and grows to the levels that we have.”

The company has played a significant role in the growth of the Canadian transportation industry. Canada Cartage is now the nation’s largest provider of outsourced fleets, with a network of facilities across the country, over 3,000 transportation professionals on staff, and over 4,000 tractors and trailers.

The event held on February 25th at Canada Cartage’s Brampton location, featured congratulatory messages from municipal dignitaries, presentations from Canada Cartage’s executive leadership and a tribute to 100 years in Canadian transportation that included the viewing of an original 1920’s Canada Cartage truck.

The complete history of the company is featured in a brand new section of the Canada Cartage website, along with rare images from the archives, an historic video tribute to 100 years, an interactive timeline and a special edition poster series.