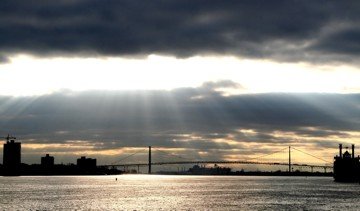 Amid pleas from aboriginal leaders for civility on both sides, peaceful protest appeared to be the order of the day, but motives varied. Some groups spoke of their own land claims, others decried the federal government’s changes to environmental oversight. Still more spoke of the need to honour all First Nations treaties.

In a message on their Facebook page, Idle No More organizers said their goal was to resist government policies in a peaceful and respectful way.

“It can be done,” the post said. “It can be done without aggression or violence. This is an energetic, exciting and transformative time.”

Tempers appeared to flare briefly in Edmonton, Alberta, however, where a group of protesters slowed traffic to a crawl on the busy highway artery that connects the capital city to Calgary.

At one point, the driver of a pickup truck tried to slowly push through the human blockade, prompting protesters to lean on the front of the truck. One even jumped up on the hood as onlookers shouted at the driver to stop.

The pickup was eventually allowed to pass and no one was injured.

Perhaps the biggest crowd of the day materialized in Windsor, Ontario where hundreds of people gathered at the Ambassador Bridge to temporarily snarl transport-truck traffic at the busiest border crossing in the country.

At one point, trucks were lined up for about a kilometre. Police said one entrance to the bridge was blocked, but a second remained open.

A group of people also set up a blockade on a rail line near Belleville, Ontario, about a two-hour drive northeast of Toronto. Via Rail said the blockade halted the movement of trains between Toronto and Montreal and Ottawa. By Wednesday night, OPP said the blockade had been cleared.

In downtown Toronto, about 100 people sang songs, played aboriginal drums and belted out anti-Harper slogans as they slowly made their way through the city’s core, snarling traffic as they marched towards Dundas Square.

“It’s a new year and we want a new relationship. What kind of relationship do we want?” protester Wandsa Nanibush asked the crowd.

“The lands, the waters, everything that is the lifeblood of ourselves, our country and our people,” Nanibush said. “We’re in this together and we have to stand side by side as nations to nations. That’s the only way this country can go forward.”

Merv King, a member of the Timiskaming First Nation who lives in Toronto, came to the rally to support the Idle No More movement and its tactics.

“Closing the roads, maybe the railroads—some of these things need to be done because if we don’t do these things then nobody pays attention. So, you’ve got to take some drastic action to get some results.”

In British Columbia, about 100 protesters gathered outside community hearings on the proposed Northern Gateway pipeline in Vancouver, which organizer Frank Brown (a member of the Heiltsuk First Nation near Bella Bella, British Columbia) said would lead to oil tankers passing through his nation’s traditional waters.

“We know that this current government has not been receptive. We know that there’s a spirit of denial in dealing with our aboriginal peoples,” Brown said.

A rail blockade was also established for part of the day on a CN rail track west of Portage La Prairie, Manitoba, where the tracks cross the Yellowhead Highway, said Terry Nelson, former chief of the Roseau River First Nation.

“This is all about the businesses in Canada that depend on CN and their product being there on time,” said Nelson, who described the protest as an effort to make business leaders stand up and take notice of the dispute.

Nelson had said the protesters planned to block the line until Saturday, but the group of about 20 demonstrators left the area after CN obtained an injunction against them which was served by police.

Elsewhere across Canada, a handful of flag-waving demonstrators stopped a train on a rail line an hour west of Winnipeg, Manitoba, while marchers were also on hand to temporarily divert traffic from the Centennial Bridge in Miramichi, New Brunswick.

About 150 people rallied outside the residence of New Brunswick Lieutenant Governor Graydon Nicholas. They pounded drums, sang and waved signs as they walked from the St Mary’s First Nation and marched through Fredericton.

In Quebec, about two hours northeast of Ottawa, the Algonquins of Barriere Lake also slowed traffic along Highway 117.

In northern Alberta, members of the Lubicon Lake Nation staged information checkpoints on roads through the oilsands region.

“We’re not out blocking the roads and shutting things down, we’re not at that point,” councillor Bryan Laboucan said of the demonstration.

“All we’re doing here today is taking a few minutes to talk to people visiting our territory, whether for work or just passing through, and educate them on our situation.”