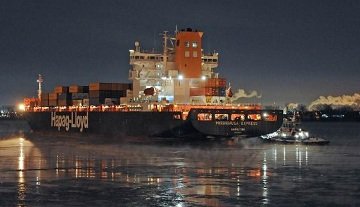 The honour, which is bestowed to the first first ocean-going vessel to enter the port without a stop-over, was awarded to the Hapag-Lloyd ship, the Mississauga Express, and its master, captain Deepinder Singh, of India. The Mississauga Express, which is 245m long and registered out of Bermuda, departed from Portugal’s Port of Lisboa on December 23, 2012, and arrived in Montreal yesterday. It is docked at Montreal Gateway Terminals Partnership’s Racine Terminal.

The ceremony was led by MPA president and CEO Sylvie Vachon, and officially marks the start of the 2013 port activity. It is the 174th time the gold-headed cane was presented at the port.

Also recognized was the work of Corporation du Saint-Laurent Central pilots Onil Jean and Jacques Vigneault who brought the vessel safely into port.

Vachon also made mention of the the 150th anniversary of the Mariners’ House of Montreal, which welcomes seafarers from around the world when their vessels are docked in port.

“This organization recreates for these men and women a family atmosphere that is both warm and welcoming. It’s a home away from home for seafarers who are separated from their families for long periods of time,” Vachon said.

The port is commemorating the anniversary with the sale of specially made toques, which were distributed to mariners who visited the port during the month of December. Proceeds from the sales, which totalled $3,248, have been given to Mariners’ House.