Over 1,800 tons of air cargo delivered to the Russian city over the last 12 months 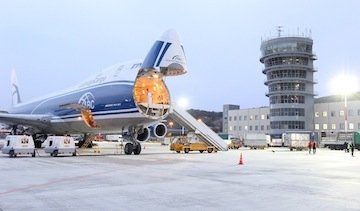 ABC on the ground in Sochi (PHOTO: Volga Dnepr)

Sochi, Russia—As Sochi prepares to make history, Volga Dnepr Group has completed its role in helping the 2014 Winter Olympic Games get off to a flying start by delivering over 1,800 tons of air cargo to the Russian city over the last 12 months, carrying broadcast, lighting and sports equipment.

“Usually the majority of freight shipments for Sochi are transported to Moscow and then trucked to Sochi but this involves long transit times. In the case of a major global event like the Olympic Games, no such delays are acceptable. Customers want the speed and reliability only air cargo can provide. Volga-Dnepr Group’s cargo delivery programme to Sochi highlighted the value of our ‘cargo supermarket’ transport and logistics capability as well as our expertise in the Russian market,” said Denis Ilin, executive president of AirBridgeCargo Airlines (ABC).

ABC is the only Russian-appointed air cargo carrier on the Europe-to-Sochi route and this, together with Volga-Dnepr’s ‘cargo supermarket’ concept, has enabled the Group to step in to meet the increased demand for cargo capacity and provide customers with direct access by air to Sochi. Overall, by the beginning of 2014, Volga Dnepr Group had performed over 30 charter flights to Sochi onboard Boeing 747, Boeing 737, AN-124-100, IL-76TD-90VD and AN-12 freighters. This included transporting the Olympic Flame in December onboard its legendary AN-124-100.

Volga-Dnepr Group’s participation in the Sochi Games dates back to July 2007, when the International Olympic Committee gathered in Guatemala to decide which city would be chosen to host the 22nd Winter Olympic Games in 2014. Volga-Dnepr Airlines transported a 63-ton ice rink which featured in Sochi’s final bid presentation.

“Transportation of this unique equipment, which contributed to the success of Sochi’s bid for the 2014 Winter Olympics, will go down in Volga-Dnepr Airlines’ history. We are proud to be part of Sochi’s success and to the on-time delivery of the 2014 Games,” added Dennis Gliznoutsa, vice-president, development at Volga Dnepr Airlines.

In 2009, Volga-Dnepr was once again called into action to support Sochi’s transport infrastructure works for the Olympics, moving 94 tons of tunneling equipment to the Russian city. In 2011, telecommunications equipment was delivered for a trial broadcast of a skiing competition and last year Volga-Dnepr carried transformers and several mobile gas turbine power plants to Sochi to provide reserve electrical energy during the 2014 Winter Olympic Games.