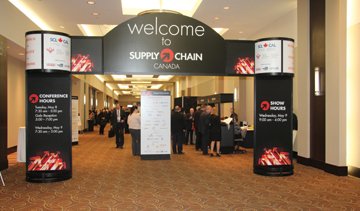 MISSISSAUGA, Ontario: Ontario expects to have a draft of its Ontario Goods Movement Strategy ready in June and hopes to release it s final strategy and action plan by the fall, a high ranking official within the Ministry of Transportation told logistics professionals attending the Supply Chain Canada conference.

Meetings with stakeholders to discuss the draft strategy are expected to take place over the summer, confirmed James Perttula, manager of the Goods Movement Office within the Transportation Policy Branch at the Ministry of Transportation.

The proposed strategy for how Canada’s most heavily populated and congested province can best move goods through its transportation infrastructure will take a “system approach that recognizes that shippers need an efficient, agile and flexible multimodal transportation system,” Perttula said.

The Ontario government had been working since 2007 with the Quebec government to develop a Continental Gateway Strategy. MTO undertook extensive research and consultation to provide a picture of the state of the multimodal transportation system and current system challenges; Identify key freight generating nodes and infrastructure, regulatory and policy matters that need to be addressed.

However, those talks have “stalled” and Ontario’s transportation ministry recently got the green light to move ahead on its own, Perttula acknowledged. Although Ontario’s plan will be complementary to the work done on the Continental Gateway Strategy and will build on many things the province is already doing, Perttula said it will help sharpen MTO’s focus on good movements.

In addition to making Ontario’s transportation system more efficient, Perttula said the strategy will address how to:

Perttula said recognition of shippers’ interests underlies how MTO will approach goods movement, and shippers think on a multimodal platform.

“Shippers think about efficiency. They rely on efficient operations in each mode and strong connections between the modes,” Perttula said, adding MTO is not looking to wade into the thorny issue of modal shifting.

“There is often talk of shifting freight from one mode to another (due to concerns about energy use and emissions). We need all the modes. We want to work to ensure the greatest efficiency of all the modes and that the connections between the modes are as strong as they can be,” he argued.

The stakeholder wish list boils down to three basic demands, according to Perttula:

Goods movement is critical to Ontario’s economy. The province’s multimodal transportation system moves over $1.3 trillion in goods per year. It carries 49 percent of Canada’s total international trade (across all modes) and almost 70 percent of road trade with the U.S.

Robust growth for goods movement is predicted for the next 20 years across all modes. Trade growth and diversification will place significant new demands on the transportation system.