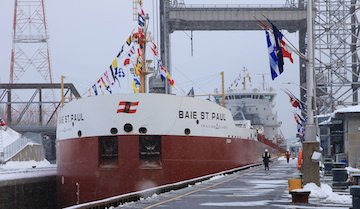 The Baie St Paul is the first of the company’s trillium class ships—ships that have been specifically designed and built for operation on the St Lawrence—to arrive in Canada. A Chinese shipyard has the contract to build the the gravity-fed self-unloaders.

“Canada Steamship Lines ranks prominently among a number of Canadian shipowners who are committing hundreds of millions of dollars to build new vessels, testifying to the confidence these firms have in the future of the Great Lakes-Seaway System,” said Terence Bowles, president and CEO of the SLSMC. “The new vessels coming into service will bolster marine transportation’s competitive edge as the most energy efficient means of moving cargo.”

The efficiencies and savings garnered by running the new ship will prove advantageous, according to CSL president Louis Martel.

“The Baie St Paul is 15 percent more fuel efficient than CSL’s previous class of ships—vessels that were already among the most efficient in the Lakes—and will save approximately 750 tonnes of fuel per year, amounting to a yearly carbon emission reduction of 2,400 tonnes.”

The positive environmental picture is one the Seaway wants to promote. “A peer-reviewed study, released in February of 2013, confirms that marine generates the least greenhouse gas (GHG) emissions of any transportation mode. The new vessels can move a tonne of cargo very efficiently, and when compared to the state-of-the-art equipment in alternate modes, generate 38 percent less GHG emissions than rail and 88 percent less GHG emissions than trucks,” said Bowles.

Bowles added that he expects the amount of cargo transported on the Seaway to increase this year. “Seaway tonnage is forecast to exceed a total of 40 million tonnes for the year.”

In terms of the outlook for cargo volume on the St. Lawrence Seaway in 2013, the SLSMC’s Bowles noted that he continues to be upbeat. “Seaway tonnage is forecast to exceed a total of 40 million tonnes for the year,” said Bowles.

According to Craig Middlebrook, acting administrator of the US Saint Lawrence Seaway Development Corporation, the confluence of a recovering economy and the investment in new ships is happening at the perfect time to drive the growth of St Lawrence traffic.

“The resurgence of manufacturing in North America is fueling demand for both traditional and new Seaway cargoes, having positive implications for Great Lakes shipping. Just as the private sector is investing in new vessels and new engines, public sector investments in lock rehabilitation, port infrastructure, and new navigation technologies are laying the foundation for sustained future growth,” he said.

This year will be the 55th operating season since work was completed (including the building of seven locks) to ensure the 306km stretch between Montreal and Lake Ontario was passable and deep enough to allow the travel of large commercial vessels.