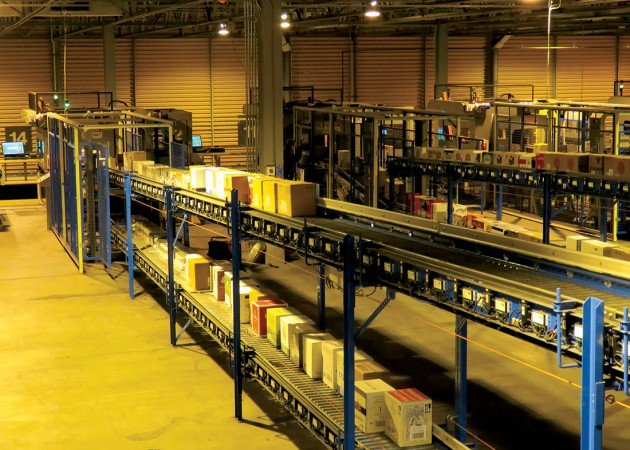 The palletizer is fed by two feeder lines for peak efficiency. A pallet worth of product is staged on one, while the other supplies the palletizer. A hinged conveyor alternates the feed between the upper and lower lines.

Deep in the fast-beating heart of the Liquor Control Board of Ontario’s (LCBO) main DC in Whitby, Ontario, a unique Canadian innovation works tirelessly, improving productivity in outbound order processing.

The technology is a mixed-case palletizing system that was developed in-house by the LCBO. It’s so good that it’s been recognized with three awards—the 2014 LCBO President’s Award for Innovation in Logistics, the 2015 Retail Council of Canada Excellence Award, and the 2015 CSCMP Supply Chain Innovation  Award. The LCBO has also applied for patents for the technology. 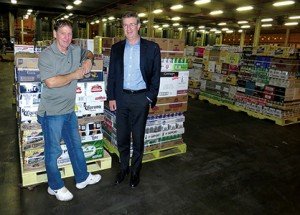 Bruce Pizzolato and George Soleas are justifiably proud of the tight and tidy pallets behind them.

The palletizer is the brainchild of Bruce Pizzolato, LCBO’s logistics director at the Durham (Whitby) and Thunder Bay retail service centres.

“As our business grows, the challenge is getting product palletized and out the door,” Pizzolato says. “I had a dream one night, came to work in the morning and told the team.”

His dream was to create an algorithm that would allow automatic palletization of outbound store orders comprising many different case sizes, including wine, beer and spirits.

The 500,000-square-foot Whitby DC handles approximately 53 million cases a year, serving more than 500 stores. Every day 200 to 300 orders, averaging 400 to 500 cases each, leave the service centre, and all of them previously headed out the door on manually palletized skids.

This is labour-intensive work, requiring 34 people per shift. And, although the LCBO staff are skilled and experienced, this part of the operation was costly thanks to on-the-job musculoskeletal injuries, product breakage, and inefficiencies because hand-built pallet loads are not as dense or stable as they might be, leading to less than optimal cube utilization in outbound truckloads. As well, there was no traceability of what was on each pallet, so when an order arrived at a store with a missing case, there was no way to track it.

“The end of the line is the only area that wasn’t automated,” says George Soleas, LCBO’s executive vice-president. “Breakage was atrocious, and it is back-breaking work.”

LCBO store orders are typically made up of 30 or more distinct case sizes. The trick was to develop a system that would allow an off-the-shelf palletizing machine to build a stable, compact load without human intervention. 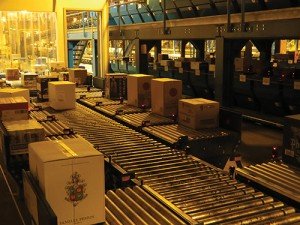 Cases that have been measured sit in the staging bays on either side of the conveyor. Once all 40 bays are full the algorithm models a layer and sends the cases to the palletizer in the correct sequence to build it.

A detailed analysis of the database of 8,000 products revealed that about half the cases were clustered in common heights. For example, 22 to 30 cm and 30 to 35 cm were the most frequently seen. They also found that when several cases from the same product were picked for a single store order, they typically arrived at the store order lane close together.

Together, these details told the team that it would be possible to build a stable layer with minimal height variation—which was key to the overall pallet stability. They decided they could allow a five-centimetre height variation in each layer without compromising stability.

After extensive research, looking at equipment on the market and sifting through academic papers, Pizzolato and his team started work on software development. They needed an algorithm that would allow cases to be automatically placed in a pattern to create stable pallet layers.

Using 3D visualization software to build a virtual pallet, they integrated a “physics engine” to allow for the effects of gravity and friction on the cases as the tiers were built.
They then developed simulation software that automatically generated thousands of pallets using an algorithm and historical order data.

The algorithm is understandably complex, but in simple terms it has three steps. It creates theoretical tier patterns based on the case sizes presented to it; it adjusts the pattern so it can be created on a standard pallet loader; and, it evaluates the pattern for stability.

To do this it groups cases by size and calculates all the possible rectangular sub-patterns. It then fits the sub-patterns into five blocks that will fit on a pallet’s footprint. The process is repeated for the next tier, ensuring that the block sizes vary. With a possible 200,000 sub-patterns for each tier, there could be several million tier-pattern combinations for each pallet.

The software also had to be able to work with a standard pallet loader. The machinery is not able to build theoretical patterns and is limited by the pre-set stops that align the cases before they are shunted onto the pallet. The algorithm was thus set up to emulate the palletizer’s mechanical row transfer, justification and squeezing operations to ensure continued tier quality.

The tiers are analyzed on many metrics. including case surface area, volume, height variation, overlap, outside boundary, maximum size of current tier and maximum size of the upper tier. Patterns that don’t meet minimum values in each area are rejected. For example, the minimum case overlap has to be 66 percent.

It took plenty of tweaking and almost two years of development time, but when they were ready to build a sample pallet using the new algorithm and the existing palletizer, they were delighted. The real pallet looked just like the 3D simulation.

“As convinced as I was, I had had a few doubts,” Pizzolato said. “But it worked flawlessly.”

The next step was to get LBCO board approval to build the prototype. According to Soleas, the successful simulation convinced them to approve the budget and allow the project to proceed to prototyping.

Along the way the LCBO team worked with vendors Millar Systems Integration for the software development, Norpak for the hardware design and development, and Columbia Machine Inc for the palletizer.

“We had a sustainable collaboration with the vendors,” Soleas says. “They came in on weekends to do the work” because the warehouse could not be shut down for the implementation.

The prototype was so successful that it was eventually cut over to production, and the team then turned to developing additional lanes. They quickly realized that throughput could be optimized with the addition of a second feeder line for each palletizing machine, with a hinged conveyor alternating between the two (upper and lower) lines.
Now the DC has 15 order lanes running, with eight Columbia palletizing machines. The last palletizer entered operation in September 2015.

Cases arrive constantly and in random order at the store order lanes from the picking area adjacent to the DC’s 100-ft high ASRS dense storage. As they are conveyed to the palletizing area each one runs under an off-the-shelf SICK dimensioner which records the case’s size.

After being measured, the cases are pushed to the side in one of 40 staging bays. (Originally there were 50 being used, but it actually offered no speed advantage, as the algorithm had so many more permutations to consider with the extra 10 cases.)

Once the bays are full the software starts thinking. As it comes up with a viable layer based on the cases at hand, the cases that will comprise it are pushed back into the feeder line in groups of four or five and roll down to the end of the line. When they get there they are staged and shoved onto the pallet, forming the first block of a layer. Then next set follows closely behind, and then another until the layer is complete. A strap is then affixed around the layer and heat sealed, holding the cases snug.

The pallet then drops down so the first layer is even with the inbound conveyor and the next tier is built the same way. When the final layer is reached, at a maximum height of 67 inches, it is strapped and the pallet is shunted down onto the outbound staging area ready for loading onto a truck, complete with a packing list of every case it carries. 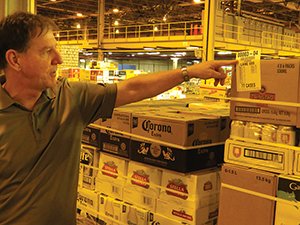 Pizzolato points out the automatically generated tag that shows what’s on each pallet.

The automated palletizers have brought many benefits to the Durham DC. Throughput on the manual palletizing line was 250 cases per person per hour. The automated system can do 1,200, but the team is happy with 1,000.

Labour costs at the Durham DC have been reduced by $1.9 million a year. By reducing the number of personnel performing back-breaking manual palletization tasks, lost-time injuries and insurance premiums are also minimized.

Truck cube utilization has improved, and the truck drivers even report feeling that their loads are more stable with the automatically built pallets.

At the receiving end, LCBO store staff are also happy. The new pallets are now held together with a single plastic strap around each layer. Manually built pallets are shrink wrapped, creating a large waste issue as well as sometimes offering surprises by coming apart when the shrink wrapping is removed. The more stable pallets are easier to unload, and because every case is accounted for, shortages are eliminated.

The team has estimated ROI at two to two-and-a-half years.

Inspiration and innovation
The LCBO is applying for patents and looking for ways to market the process. And this unique system was conceived and created entirely in-house, without any funding for the research, in less than five years, overcoming a few obstacles along the way.

“This kind of R&D would normally get government funding,” says Gerrard Harrington, the DC’s acting director, “but because the LCBO is a government agency, we couldn’t.”
The in-house project team was also “off-the-charts small” at six people, Harrington said.

“I couldn’t be more proud of the team I had working on this,” Pizzolato says. “This is a team I’ve always believed in.”

And although there were ups and down and “some pretty sad pallets” came out of the machines at first, he adds, the team “was fully engaged.”

“It was almost infectious,” Pizzolato recalls. “The enthusiasm grew every time we turned the page.”

“This was developed from scratch; it’s never been done anywhere else,” he said. But “if you believe you can do what you say you can, you’re that much closer to success.”