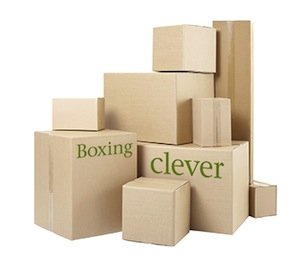 Every time a part or product gets shipped it needs protection. An extraordinary range of plastic and paper usually fills the gaps resulting from packaging that doesn’t fit the product being shipped. That empty space, the dunnage and the excess corrugated all carry material, shipping, handling and disposal costs that ultimately affect corporate bottom lines—and consumer pocketbooks—as well as global sustainability.

At least that is how it was until Canadian firms like Holland & Crosby, PH Tech, KML Windows and Packaging Logistics 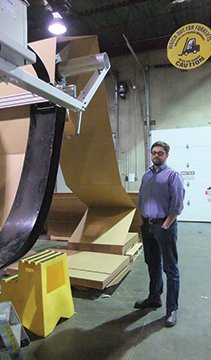 Holland & Crosby’s operations manager Max West beside the PackSize EM7-25 that’s been part of every plant tour since it was installed in August 2013.

According to Packsize, the move to on-demand, right-size packaging from standardized sizes ordered in bulk results in savings of about 35 percent by reducing shipping, excess packaging, product damage and returns and disposal costs. The use of Packsize machines typically reduces shipping volumes and corrugated consumption by 40 percent and 15 percent respectively. Reducing on-site box inventory can also lower fixed real estate costs or allow customers to reallocate that space.

Not for sale
The Packsize business model is also unique because while customers can have the use of a Packsize machine onsite, they can’t buy, lease or even rent the machines. Packsize covers the cost of shipping, installing, maintaining, repairing, troubleshooting, employee training and relocating the machines at their customers’ sites. All customers have to do is call Canadian area manager Marcus Flannery, ask for a packaging and shipping analysis and agree to buy all of their corrugated for the machine (a proprietary z-Fold corrugated) exclusively from Packsize. Despite the fact z-Fold’s contents are 97 percent recycled corrugated, it is as durable as it is sustainable.

“This business model has been the key to our success because the prospect’s decision to go with Packsize is a slam-dunk—it’s a risk-free proposition because the z-Fold corrugated material is the only cost they pay and they’d be buying corrugated anyway,” says Flannery. “Single-sourcing z-Fold from Packsize saves customers’ the administrative time and effort required to order, track and manage corrugated from other suppliers.” 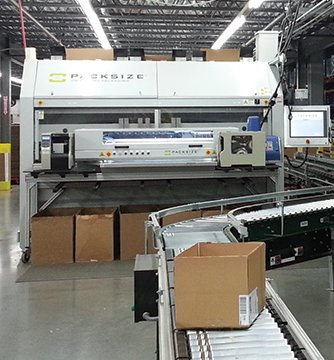 Agile and flexible
“Packsize really was a no brainer for us—why doesn’t everyone have one?” says Max West, operations manager at Holland & Crosby, a Mississauga, Ontario-based printing company, which got its EM7-25 in August 2013 and has since reduced associated packaging and shipping costs by 30 to 40 percent. “As a digital printer in the fast-paced, on-demand world of retail POS, we needed a packaging system that was as agile and flexible as our printing solutions.”

While Holland & Crosby, PH Tech and KML Windows all appreciated their previous packaging suppliers’ ability to provide the required packaging within 12 to 48 hours, those providers simply couldn’t deliver the extraordinary range of necessary sizes and shapes in mere minutes or in low volumes.

Holland & Crosby’s EM7-25 can print any size of box in about 30 seconds, but many of the box sizes produced on the Packsize machines can be made in under 10 seconds. It is true on-demand, just-in-time, right-size printing, which is important since Holland & Crosby’s POS product dimensions can change just before or even in the middle of a print run.

Like Holland & Crosby, KML, a custom window and door manufacturer, produces an infinite variety of sizes and shapes and rarely repeats itself.

“Our packaging department had to custom-craft every single box and due to the unusual shapes, our packed boxes often had voids,” says Ricardo Rodriguez, performance engineer at KML in Strathroy, Ontario. “Initially, our packaging employees were skeptical but the Packsize EM6-30 performed as promised and cut the time it takes to pack a unit in half.”

Of course, oversize boxes can be cut to size, but that option will require additional labour, disposal and potentially dunnage and corrugated replacement. Undersize boxes are even more of an issue than oversize boxes, because they’re typically thrown out, recycled or inventoried in the hopes they will fit another product run.

Sturdy and strong
In Lévis, Quebec, PH Tech designs and extrudes PVC profiles for high-performance residential doors and windows. The smallest PVC profile measures 1 inch wide by 1/8 inch high by 16 feet long and the largest is 12 inches wide by 6 inches high by 16 feet long. When PVC profiles are packed four to 200 per box, the box can weigh up to 154 lb. However, the parts may be as small as just a few inches square. A part-filled box can weigh up to 100 lb. As a result, PH Tech typically needs up to 200 boxes daily and relies on 100 standard box sizes, which were generally manually cut to size.

“Thanks to Packsize, I make the size I need, in the volume I require, on the spot—I don’t have to order and store 200 pieces onsite when I only need 25,” says Eric Bellavance, procurement manager, PH Tech. “We often cut boxes and threw out the extra 70 inches because it was cheaper and less hassle than tracking and inventorying the remaining pieces for future use.”

Right-sized, just-in-time box production has allowed PH Tech to put 10 to 15 percent more product on a truck and reduced its onsite cardboard inventory by about 17 percent. As well, it has freed up warehouse space and cut disposal costs since PH Tech no longer throws out five to 10 percent of its corrugated.

To accommodate and stabilize customers’ uniquely shaped products, all Packsize machines can also manufacture “packaging kits”, each of which might include outer box and edge protectors, partitions and the dead space fillers that keep oddly shaped products firmly positioned in the box.

In the past, Holland & Crosby and KML employees made these “corners” and “bumpers” themselves, but Holland & Crosby’s West finds the machine-made pieces are better than the handcrafted versions and actually strengthen the box once in place. 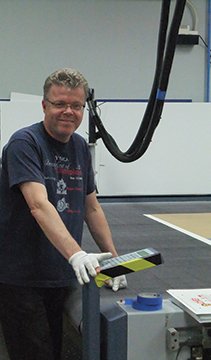 While void-fill products can help protect the contents, they won’t provide the requisite resistance when heavy boxes are stacked. If the box is crushed, it communicates a less than positive message and also visually alerts recipients to carefully check the contents for any sign of damage. When void-fill product is lacking or insufficient, the contents can move around and sustain damage.  If products arrive in less than pristine condition, returns or compensation are likely, which also affects everything from the company’s reputation to its carbon footprint and additional packaging, shipping, administrative and replacement costs.

“Our consolidators and customers noticed the difference right off the bat and based on the feedback, they really see the benefits,” says KML’s Rodriguez. “Using properly fitting boxes has virtually eliminated crushing, despite the fact we’re now able to stack the packages higher.”

Perfect-fit boxes have affected returns at each of the three firms, and so far at PH Tech, returns are down five percent, with Bellavance expecting an additional five percent drop as they maximize their use of the EM7-25.

Learning on the job
Training is supplied by Packsize and in most cases, employees have embraced the system in less than a week. While it helps if they’re accustomed to working with Windows-based applications and touch screens, a PH Tech employee with no computer experience now runs his firm’s EM7-25 seamlessly. In more than 25 years with PH Tech, that employee’s time had been devoted exclusively to packing product into boxes. As the dedicated Packsize machine operator, he now works year-round with no downtime even when PH Tech’s volumes slow in December and January.

“He’s thrilled to have expanded his skills and be in charge of programming and operating a big machine that is now an integral part of PH Tech’s daily operations,” says Bellavance.

Packsize machines  can be operated/programmed right at the machine’s touch screen or operators can do it from a networked computer elsewhere in the plant. Walking over to the Packsize isn’t an issue if you do it just few times daily, but depending on the frequency and the size of the plant, the number of minutes and steps will have a cumulative effect.

When users encounter issues with the Packsize machines, they call the Packsize helpline and typically get a callback within three to five minutes.

Across the board, these Packsize customers agree the on-demand Packsize right-size boxes deliver a variety of productivity, efficiency and cost benefits and as an added bonus, the machine-made Packsize boxes present a consistent and professional image that’s aligned with customers’ expectations.

“Retail tends to be a little last-minute and while we’ve always followed our customers’ leads and adapted to them, Packsize has made it far easier and less costly for us to do it,” says West.

“Our customers aren’t noticing a difference in our service or packaging, but my stress level and my shipping distribution managers’ are down by 40 percent. We’re so proud of our EM7-25 that we show it off on all of our plant tours!”