November 29, 2017
by Inside Logistics Online Staff

November 29, 2017
by Inside Logistics Online Staff 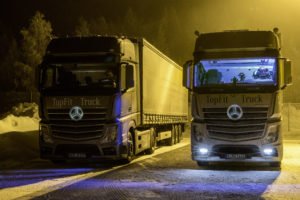 Daylight+: artificial daylight in the cab of the TopFit Truck (right) turns the long ride agreeable in the winter darkness.

STUTTGART, Germany — They spend days or even weeks in their truck. Most of the time, long-distance truck drivers are exposed to poor light conditions in their cab. During winter in particular, the darkness restricts the alertness and well-being of truck drivers.

At the start of this year a research team at Daimler AG investigated the effects of having additional light in the cab during the darkness of winter in Finland. Eight test drivers simulated the daily work routine of a trucker over a period of two weeks. For one week they were on the road in a Mercedes-Benz Actros TopFit truck without additional lighting (the “reference truck”), and for the other week in a TopFit truck with Daylight+.

The Daylight+ truck is fitted with three light applications which illuminate the cab with lighting similar to daylight: first of all a light alarm which simulates sunrise; secondly a light shower in which the driver can “fill up” with 30 minutes of artificial daylight before and after a trip; and thirdly Daylight+ as a supplement to daylight while driving.

The study primarily focused on tolerance of the light, sleep quality and the performance of the drivers.

The results have now been assessed: the adaptive Daylight+ was able to triple the daily dose of light while driving. Together with the light showers before and after a trip, it was possible to increase the light dose received in the cab more than five-fold compared with a normal daily dose.

With Daylight+, the brightness in the cab is continually adjusted to the outside conditions by means of a sensor. As a result, the daily light dose can be increased significantly without dazzling the driver. 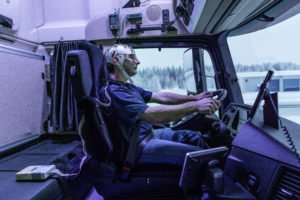 Researchers at Daimler AG examine the effects of additional light on the mental state of truck drivers.

Dr Michael Schrauf, an internationally renowned expert on measuring brain waves, recorded brain activity by means of electroencephalogram (EEG) in order to identify inattentiveness during periods of driving. It is clear from this that the drivers generally showed different levels of alertness.

However, all of the test subjects were more alert with Daylight+ than in the reference truck without lighting. In terms of minutes, thanks to Daylight+ it was possible to reduce the inattentive period of driving from 44 minutes to 18 minutes on average. Of particular note is the fact that the inattentiveness of the drivers did not increase in the afternoon when the cab was illuminated with Daylight+. As such it was possible to avoid the typical “afternoon slump”.

Psychological tests were also carried out on the drivers to determine reaction speed. The tests showed that with Daylight+, the reaction capacity remained constant and fewer incorrect reactions occurred when carrying out monotonous tasks.

Restful sleep in the cab

However, data were not only recorded while driving, but also at night – to examine sleep quality in particular. The results show that in the week in which the drivers drove the Daylight+ truck, the proportion of deep sleep experienced was higher. More deep sleep means more relaxing sleep, which in turn can result in higher performance. 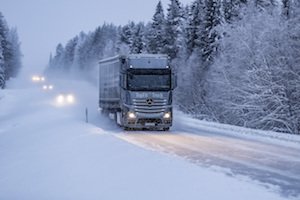 It was not just the objective data which showed positive results, however. In the questionnaires which the drivers filled out, they subjectively scored the cab illumination very positively in terms of maintaining fitness, a sense of well-being and concentration. The test subjects reported that they enjoyed an improved mood, felt less tired and perceived the cab as more spacious.

In short: Daylight+ can enhance safety and comfort

When coming back to the initial question, the study provided strong indications that a driver working in conditions “with light” performs better and remains more alert and fitter than in conditions “without light”. Thanks to the subjective positive perceptions of the drivers, Daylight+ could also represent a further step towards enhancing road safety.